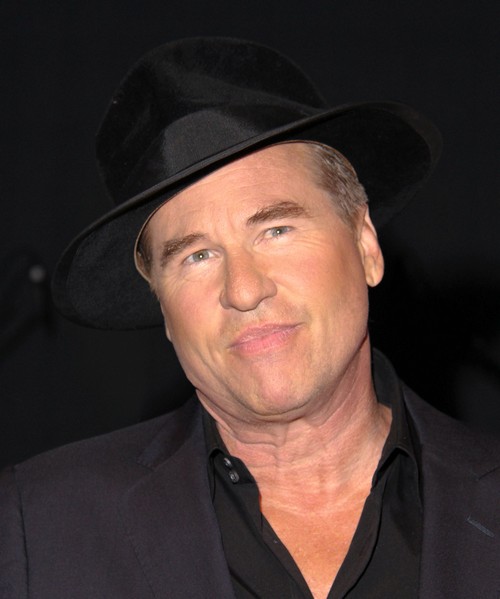 Val Kilmer is in the ICU again and friends and family fear the actor may die this time. The actor reportedly was rushed to a Hollywood hospital sometime in the early morning hours of October 23. This latest health crisis could be related to reports earlier in 2015 that he had a throat tumor.

An eyewitness to this latest health crisis has come forward and told Radar Online that as Kilmer was ushered into the hospital they overheard medics discussing comfort care for the actor. Val’s family has feared that his Christian Science beliefs are keeping him from receiving the appropriate medical care. Followers of Christian Science believe they will be healed by prayer and not medical treatment.

On January 26, 2015 Kilmer was hospitalized when a 911 call came from his home because he was bleeding from the mouth. At the time representatives for the actor said he was undergoing tests for a possible throat tumor. After his release the “Batman Forever” star denied that he had tumor. He tweeted – “Again, no tumor, no surgery…will stay close to my doctors advising, my family and Christian Science practitioner when all the facts are in.”

In February 2015 it was thought that Val had only months to live as he continued to refuse traditional medical treatment. Anyone who insisted he do so has been cut out of his life. As summer approached doctors allegedly told Kilmer didn’t have long to live – perhaps only two or three months.

Val Kilmer started wearing scarves around his neck not long after the January reports of the tumor – no one has seen him in public without one in months. What is he hiding under those scarves? And the actor has not been looking well since his first ICU hospitalization – he has lost a lot of weight and seems to be wasting away.

Family and friend have desperately tried to get Val to see reason and let doctors remove the tumor but it may be too late. The last time he was hospitalized Kilmer had been coughing up blood. His children Jack and Mercedes cared for their father upon his release from the hospital the first time but now they are facing the possibility that Kilmer is dying and there is nothing they can do about it.

Is Val Kilmer receiving end-of-life care at UCLA Medical Center? Are doctors doing everything they can to keep him comfortable? Could proper medical care have helped avoid this dire situation?

Update: Val put on Facebook: Thank you all for your love and support. There’s a rumor I’m unwell again and in hospital which is totally untrue. I was in to verify I have no tumor or infection of any kind which was verified by the very caring experts at UCLA. So it looks like the rumors of Val’s demise are premature and false.