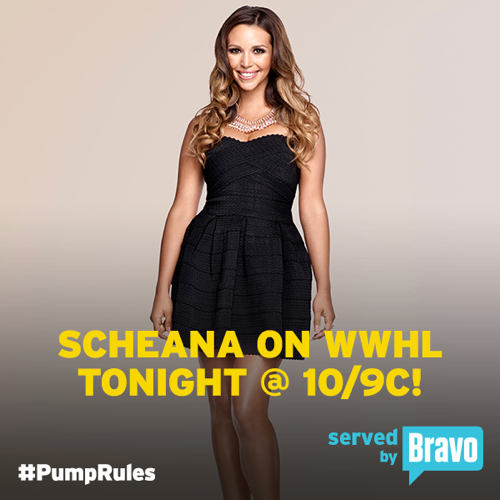 Tonight on Bravo Vanderpump Rules returns with an all new Monday February 23, season 3 episode 16 called, “Jax Cracks,” and we have your weekly recap below. On tonight’s episode, Jax  Taylor struggles to stay loyal to Tom Sandoval, but Stassi Schroeder teaches Kristen Sandoval how to make Jax reveal Tom’s alleged cheating.

On the last episode, Scheana broke down when her plan for a perfect wedding fell apart. Kristen lived up to everyone’s worst expectations when she fought with James at the reception. Tom Schwartz made a bad situation worse when his apology gift to Katie lead to tears. Did you watch the last episode? If you missed it, we have a full and detailed recap right here for you.

On tonight’s show as per the Bravo synopsis, “Jax struggles to stay loyal to Tom, but Stassi teaches Kristen how to make Jax reveal Tom’s alleged cheating. James apologizes to Kristen to salvage their relationship. Lisa teams up with Lance Bass to host a puppy adoption at PUMP.”

Tonight’s episode is going to be another drama packed one, which you won’t want to miss. So be sure to tune in for our live coverage of Bravos’ Vanderpump Rules Season 3 episode 17 — tonight at 10PM EST! While you wait for our recap, hit the comments and let us know how excited you are about the new episode of VR tonight.

Lisa asks James how he enjoyed the wedding, and he tells her about his fight with Kristen, where he got drunk and they fought in the parking lot, leading to her punching him in the face. Lisa says if she were in a relationship with Kristen, she would be insecure too. She says she thinks he’s a nice boy, and she just doesn’t want to see him get hurt. She says he may be involved in something that may not be too beneficial to him. When asked if he’s happy with her, he says yes, every day. She gives him the advice to focus on his job in order to keep it, keep his head down and he’ll feel better in a couple of days.

Lisa says in confessional that James is sweeter and more genuine when away from Kristen.

Stassi and Peter hang out, and she pumps him for gossip about the wedding.

He tells her that Kristen caused a scene at the wedding reception and punched Tom in the face.  She says Kristen has been texting her recently asking her to go to breakfast. She doesn’t know what’s going on, but she’s curious.

Kristen and James meer up to talk. He tells her he has taken the last couple days to evaluate himself and his actions, because she wouldn’t have punched him if he didn’t get in her face. He apologizes, and tells her he loves her. She says she felt so threatened, which is why she punched him, and she shouldn’t have ever touched him. She says what she’s worried about now is that their relationship is so tainted by that. James brings up Tom, asking how she expects him not to be insecure as she talks about him so much.

Kristen says in confessional that it’s not Tom she’s obsessed with, but proving she isn’t a liar.

James tells her he is trying to address the root of the problem. She tells him she clearly doesn’t want to be with anyone else, and that they need to get their shit together before they can pretend everything is okay. James responds that he doesn’t want to pretend. She says if he loves and trust her, he shouldn’t listen to stupid things that people say. They apologize to eachother again, hug and make up.

Katie, Schwartz, Jax, Tom and some blonde chick I can’t identify for shit all go out together for food. When the discussion goes to Katie’s new ring, Schwartz says he wants a certain amount of money in his bank account before he’s ready to get married. In confessional. Katie says she doesn’t know what Schwartz considers financial security and when he will be ready to get married, calling it a cop out.

Scheana is back from her extremely cliche honeymoon in Hawaii. She asks James how he and Kristen are, and he takes her outside to talk. She says what she was worried about was something happening with Kristen at the wedding, and she’s mad at the fact Kristen always finds a way to make an event of her all about her.

When James starts to defend her, she asks why he is defending her when she punched him in the face at a wedding and left with someone else. He says he doesn’t want to deal with high school drama, as he’s been out of high school for two or three years.

Jax asks Lisa if she knows about the drama at the wedding, adding that Kristen keeps texting him about Tom and will never stop.

Lisa tells him that honesty is a good quality, one that he doesn’t possess. She also teaches him about diplomacy. She says Kristen is obviously not going to leave him alone so he needs to address her directly, but not here.

Kristen and Stassi get together at a cafe.  Kristen says she’s so sick of Tom about calling her a liar regarding his own cheating scandal, which is obviously true. She says that she has been texting Jax endlessly because Jax knows the truth, but she can’t get him to be honest or say it out loud when people are around. She wants help from Stassi in this matter.

She says she should have him say it around Scheana, who will run and tell the others about it. She tells Kristen that she needs to push harder, because Jax loves to spill the beans. However, she tells her to consider letting it go.

In confessional, Stassi says she needs to stop trying to point out the flaws in others to feel better about herself.

Kristen says she wants to give it just one more shot before letting it go.

Jax tells Tom that Kristen is blowing up his phone, asking what to do. He tells Jax he knows how he is when it comes to gossiping. He tells him not to talk to Kristen about him at all, saying that he has been feeding her obsession about the Miami situation. Jax says he doesn’t even talk about that. Tom says he knows he doesn’t now.

Tom says in confessional that he knows Jax and that he’s sure in the past he has told Kristen some “colorful lie” as he always does, which is fueling this fire.

He tells Jax that he and Schwartz have felt angry and betrayed by him lately. He says that if he wants to have substantial relationships in his life, there needs to be trust and respect, otherwise he’ll just have fluff, or social friends.

Stassi tells Kristina about her breakfast with Kristen. Kristina says Kristen should be happy she’s not in that situation anymore and should let it go, and that she looks like a psycho. Stassi says the best closure for Kristen is to learn there won’t be closure.

Stassi also tells Kristina that she has been asked to style for Sur’s photo shoot, but she doesn’t want to do it. “I just need to stay away,” she says, adding in confessional that she would feel like a hypocrite styling her enemies for a photo shoot.

Scheana and her husband, Jax and Kristen go to dinner. Scheana is looking for an apology from Kristen for punching James at her wedding. However, when she asks Kristen what she wanted to talk about, Kristen says she is sick of being called a liar. Some other chick says she wants to back Kristen up, asking Jax why he won’t just admit the truth.

Jax says that girl had sex with Tom in the room. He says he “100%” thinks it happened. Kristen says this is not about wanting Tom and Ariana to break up, but proving she isn’t a crazy liar. Scheana says who cares because Tom calls her a whore because he’s her ex and will always talk shit about her.

Scheana says she doesn’t believe every single detail of the story when asked. Jax asks Kristen if the woman gave any details that she would only be able to identify, and she says yes.

Scheana says it doesn’t matter what she thinks, because all that matters is that her friends are happy.

Kristen starts crying, saying people should cut her a break. She then storms out.

Andy Cohen: Scheana and Scott Wolf are the guests.

The poll question is: Whose story do you believe, Jax’s or Tom’s?

They discuss the way Stassi was talking shit about Scheana’s wedding, including her crop top wedding dress. Scheana is given twenty seconds to respond to her hater, and she says she doesn’t care what anyone says because it was her wedding and she was happy with it.

Sneak peek of next week’s episode:

Tom asks Kristen if Jax said 100% that something happened in Miami, and when she says yes, he flips out and tells her that it doesn’t matter because no one’s going to like her no matter what. Kristen says he looks like a liar, and Tom says she looks like a psycho.

The next topic is tweets by Kristen claiming Jax lied about the stripper story. Scheana says she doesn’t think she heard it from Jax, but she wasn’t there to know if it happened or not.

A viewer question asks Scheana what she would change about her wedding if she could.
She says she probably would have just taken a chill pill and tried not to get so angry, but she wanted her wedding to be perfect.

A caller asks if Kristen really loves James or if she is using him.  Scheana says she doubted the relationship at first, but they have had a tumultuous relationship in the past year and Scheana does think Kristen loves him.

Someone on Twitter asks Scheana if she paid the wedding planner for her work, and she says yes. When asked if she has spoken to her since then, Scheana says she heard she was saying some bad things on Twitter but they haven’t spoken.

A caller asks her if she still thinks about the situation with Eddie Cibrian (the married actor with whom Scheana had an affair). Scheana says she wouldn’t want that to happen to her, but it’s old news and she doesn’t think about it anymore.

Another asks why she was mad about the punch, which occurred in a parking lot. Scheana says she assumed it was a big thing and now she knows it wasn’t. She gives her apologies.

People on Twitter want to know if Scheana has had a boob job, and she says no.