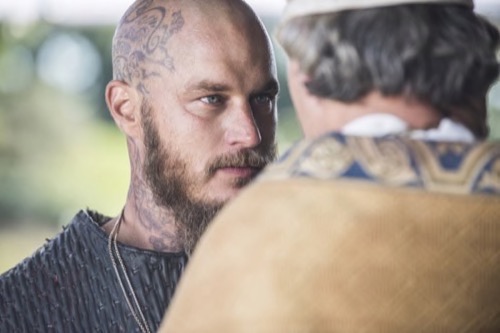 Tonight on the History Channel Vikings returns with an all new Thursday, April 16 season 3 episode 9 called “Breaking Point,” and we have your weekly recap below. On tonight’s episode, the Vikings launch an all-out second assault on Paris, and Emperor Charles is forced to make a desperate move.

On the last episode, the Viking army attacked Paris as the city musters its forces for defense. Did you watch last week’s episode? If you missed the episode we have a full and detailed recap, right here for you.

On tonight’s episode as per say the History Channel synopsis “the Vikings launch an all-out second assault on Paris, and Emperor Charles is forced to make a desperate move. In Wessex, Judith is faced with her own pivotal decision.”

Tonight’s episode looks like it is going to be great and you won’t want to miss it, so be sure to tune in for our live coverage of The History Channel “Vikings” at 10:00 PM EST! While you wait for our recap hit the comments and let us know how excited you are for the season 3 episode 9 of Vikings tonight.

Tonight’s episode of Vikings kicks off with Ragnar wandering through the cap on the beaches of France, he heads out to the woods where Floki is hiding. He tells Ragnar that he doesn’t understand why they failed, he tried everything to make them succeed. Ragnar nonchalantly says that the others will try again tonight and walks away, leaving Floki in the woods.

Later that night after dark, Lagartha and some of her men begin swimming through the water to Paris for a sneak attack. The French are in high alert and standing guard on top of the wall. Lagartha and her men make it inside the city walls undetected – she begins creeping through the dark hallways and silently killing the guards.

The French are finally alerted that the Vikings are inside the city and the soldiers begin attacking, Lagartha manages to light the large wooden gate on fire and Rollo and his men make it inside. As they are running down the long corridor in to the palace the French begin rolling a huge wheel down the corridor with spikes on it. Princess Gisla watches as Rollo single-handedly stops the wheel and the Vikings begin charging down the corridor and killing the French soldiers left and right.

Ragnar is in bad shape and has been urinating blood all day, he stays behind on the beach and watches from a distance. He fells to the ground and begins hallucinating. Meanwhile in Paris, Count Odo rushes and tells King Charles that the North Men are inside the city walls – he begs the King to come down and reassure the men, he says that the men need his encouragement. The King refuses, Odo reminds him that his grandfather Charlemagne would have put on his armor and come down and fight alongside his soldiers. King Charles scoffs that he is not Charlemagne.

Odo heads back to the battle – French soldiers and Lagartha and Rollo’s men are being slaughtered in the corridor. Floki screams to Rollo that they can’t get through the French soldiers – Rollo finally concedes and shouts at his men to pull back. They barely make it out of the Palace alive. The French soldiers take two hostages and drag them to the king: Earl Siegfried and the wanderer that speaks French. Odo demands to know who the great warrior was that stopped their spiked wheel – the wanderer reveals that his name is Rollo. Princess Gisla tells Count Odo that she wants him to bring her Rollo’s head.

In Wessec King Ecbert summons Judith, he informs her that Aethelwulf’s mission in Mercia was successful and he is on his way home. King Ecbert tells Judith that he plans to keep his promise to protect her and her son Alfred, Athelstan’s baby from anyone who will harm them – including Aethelwulf. But, King Ecbert says he is not going to protect her without getting some reward in return. He tells her that she is going to be his mistress and orders her to get in bed.

In Kettegat Princess Aslaug is holding court, two of the men left behind bring her a Christian who has been preaching about the Devil, he tells Aslaug that her Gods are dumb and blind and they can’t bring them any salvation. Princess Aslaug says that Christ may be a god, but her Gods are greater and mightier. The Christian begins screaming about the holy ghost until someone in the crowds throws something at him and knocks him down. Aslaug asks the Christian if he will trust his fate to his god and he agrees. They head outside and everyone gathers around, they take a burning hot rock and place it in his hands and he drops to the ground and begins screaming, his hands are covered in blood.

Meanwhile in Paris, they are preparing to behead Earl Siegfried. He requests that the guard hold his hair back so that they can get a clean cut. Siegfried puts his head on the block and as requested a soldier holds his hair to the side. He pulls his head back at the last second and the soldier wielding the axe cuts off the man holding his hair’s hand. Siegfried laughs hysterically before they behead him. After the beheading Odo and Princess GIsla make their rounds through the city – hundreds of people have come down with a “dark sickness” and are laying in the streets coughing. Odo reports the illness to King Charles and tells him that they lost too many men and they are going to have to leave the city for food soon – Count Odo advises him to surrender to the North Men. Princess Gisla shouts at her father not to listen to the Count.

Aethelwulf arrives back at Wessex and he sits down to have dinner with Ecbert and Judith. Aethelwulf tells his father that Queen Kwenthrith tried to seduce him to get her way, but he was able to turn her down. Ecbert gives a speech about being loyal to his wife, and Aethelwulf says that he has forgiven her for sleeping with Athelstan and he knows it was just god’s will. Aethelwulf changes the subject and asks Ecbert if he sent him to Mercia so that Kwenthrith would kill him. Ecbert is astonished my his accusation and says that he is building this empire so that he can pass it on to him.

The French travel to the beach to meet with the North Men and discuss a treaty. Ragnar is lying on a makeshift bed and still writhing in pain – Rollo and Bjorn speak to the soldiers. They want Ragnar to meet with the King outside of the city with no weapons, Bjorn says they will let them know whether they will discuss a treaty tomorrow. After the French leave Lagartha, Rollo, and Bjorn begin arguing over whether they should attack Paris again – or meet with them to discuss a treaty. Ragnar gets up and begins screaming that he is the King and it is his decision, he doubles over and coughs up blood on the ground and then announces that he will go to the meeting tomorrow.

The next morning Rollo realizes that Ragnar went to meet the French without him. At the meeting place Count Odo offers Ragnar gold and silver to left the siege. Ragnar informs him it is not enough, he demands that Count Odo’s priest baptizes him because he is dying and he wants to go to Heaven to be with Athelstan. The French are baffled by Ragnar’s request, but the priest follows him in to the water and proceeds to baptize him. Lagartha, Rollo, and Floki arrive just in time to see Ragnar being baptized and they are horrified by the scene.