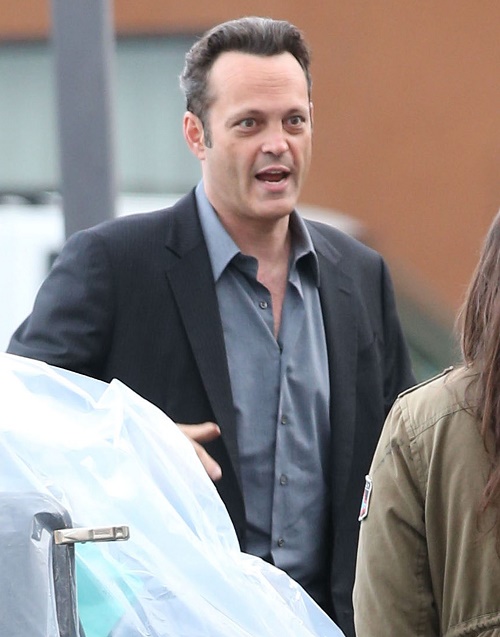 There is a war breaking out on the set of HBO’s wildly popular series True Detective between stars Vince Vaughn and Taylor Kitsch. Season 2 of the crime drama is set to make its primetime debut on June 21. When Kitsch learned he would be starring alongside the hilarious Vince Vaughn, he was beyond thrilled – but once he met the demanding actor on set of the HBO show, he quickly began to reconsider his opinion of his new co-star.

According to the June 8 edition of Star Magazine, “Vince Vaughn and Taylor Kitsch, unlike BFFs Woody Harrelson and Matthew McConaughey, locked horns off camera. And when Taylor, who is 11 years younger than 45-year-old Vince – jokingly nicknamed him ‘Old School’ on set, it went over about like a lead balloon.” This actually isn’t the first time that Vince Vaughn has been dubbed impossible to get along with on set, more than one actor has reportedly had issues with the actors over the year. Then again, who really wants to be called “old” by an up-and-coming actor who is over a decade younger than you?

Star Magazine’s inside sources dished, “Taylor was excited to meet Vince, but Vince was in serious mode and didn’t have time to be buddy-buddy with Taylor. Vince has a thin skin, and he wasn’t in the mood for Taylor’s nonsense. It created a lot of tension throughout filming.” Who would have thought that Vaughn, who makes a living out of making jokes at other’s expenses, would be so sensitive about someone cracking jokes about him?

In Vince’s defense, he was most likely under a lot of stress working outside of his comfort zone in a serious role where he couldn’t goof off all day on camera. Do you blame Vince for being testy with Taylor? Or was he being a total diva on set of True Detective? Let us know what you think in the comments below!