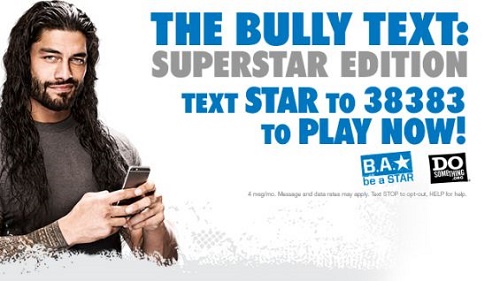 WWE and DoSomething.org have teamed up to fight one of the biggest social issues faced by teenagers today: bullying. Bullying, especially in our time of ever present social media channels, has grown into a huge problem – so any effort to reduce these poisons in our schools and among our friend circles is a worthy and just cause. Will you join the fight today? The two organizations have come together on a united, interactive platform. The Bully Text: Superstar Edition, a campaign now in its second year, gets young people to take anti-bullying actions by playing a stellar text message-based game!

According to info from WWE, “From today until Monday, August 31, young people can virtually work their way through six levels of scenarios with guidance from WWE Superstars and Divas, including Roman Reigns®, Dean Ambrose®, Paige®, Natalya® and Alicia Fox®. Then, each player is given options to stand up and speak out against bullying. For example, “You sit behind Roman. Someone in the back of the bus keeps throwing paper airplanes at him. Do you A) Play it cool- it’s not your fight or B) play Superman?” Along the way, players will see how their anti-bullying skills compare to others, and ultimately whether they’ve earned the WWE World Heavyweight Championship title in bullying prevention.”

This sounds like an amazing way for kids to engage with this issue. This call to action is an important one, so if you are an adult who’s reading this and you have young(er) kids of your own, consider telling them about this game – or, at the very least, talk to them about bullying and how their actions can generate a wave of positive vibrations. Together, let’s try to make the world a better place – one filled with less hate and more kindness.

So how can you sign up to play this innovative game, fueld by the spark of social change and initiative? To play Bully Text this year, text BULLY to 38383 or visit DoSomething.org/bully. Close to 100,000 young people played the Bully Text game in 2014. Let’s double that number in 2015!