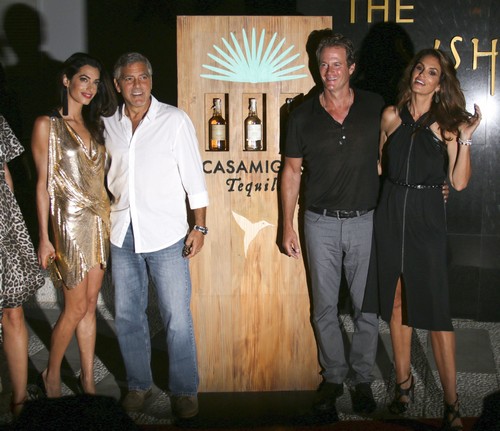 Amal Alamuddin and George Clooney’s marriage might be in danger and it’s mostly because of the human rights lawyer’s jealousy issues. In fact, there’s speculation that Amal Alamuddin is fed up with George Clooney’s relationship with his best friend Rande Gerber and Cindy Crawford as the two women simply can’t get along.

Amal Alamuddin married George Clooney knowing that she would get attention for not only being the Hollywood actor’s wife, but for her being one of the biggest celebrity lawyers in the world despite a career lacking in stellar results. After all, Amal Alamuddin is obsessed with her image and always being the center of attention.

That’s why the British-born lawyer looked absolutely miserable this past week in Los Angeles, as she was once again forced to spend time with Rande Gerber and supermodel Cindy Crawford.

Many fans know Cindy Crawford as one of the original super models of the 1990s. Cindy Crawford is not only one of the most beautiful women in the world, but also a close friend of George Clooney’s, much to Amal Alamuddin’s dismay. Amal Alamudin knows that she can’t compete with Cindy Crawford’s beauty or her charm for that matter and that’s why she’s always photographed keeping her distance from the former cover girl.

Amal Alamuddin and George Clooney along with Cindy Crawford and Rande Gerber were spotted having a double date in Malibu together. And while the two couples were all smiles for the cameras, Amal Alamuddin looked absolutely miserable while she tried to avoid being photographed near Cindy Crawford, in fear that she simply doesn’t want to be compared in paparazzi photos to the former super model.

George Clooney’s life in Los Angeles is just as important to him as the one he has in Lake Como, Italy or even in England and that’s why Amal Alamudidn has no choice but to accompany his husband on his trips back home, whether she likes it or not.

Tell us CDL readers, do you think Amal Alamuddin is jealous of George Clooney’s relationship with Cindy Crawford? Let us know what you think in our comments section below.