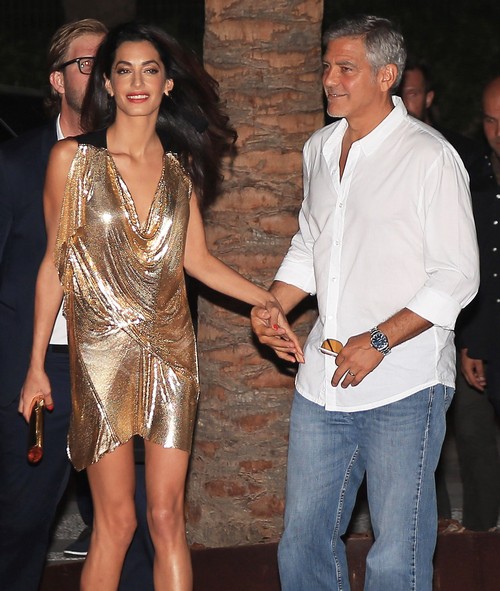 Amal Alamuddin, now Amal Clooney, used to have a stellar reputation as a human rights barrister in the UK, but now that she’s wed to George Clooney, she’s gone full Hollywood. And, as it turns out, maybe that reputation was more rumor than reality. Amal is taking on increasingly shady clients including one of the savage sons of Muammar Gaddafi as well as Gaddafi spy chief Abdullah Senussi. Senussi was convicted in Paris for the 1989 bombing of a passenger plane that killed 170. Gaddafi’s son was responsible for countless human rights violations.

So why is a “human rights” lawyer defending these monsters? This is just one of the increasingly shady actions that the new Mrs Clooney, Amal Alamuddin, has taken in recent months as she distances herself from good works and embraces the downhill slide into just another Hollywood phony. Just this past weekend, George Clooney and Amal Alamuddin were out partying in Ibiza, Spain with some of their famous friends. Ibiza – really Amal?

That’s where all the most important figures in politics and philanthropy hang out, right? I mean with Paris Hilton deejaying every weekend of the summer, it must be a hotbed of intellectualism. George Clooney and Amal Alamuddin were snapped hanging with Cindy Crawford and Rande Gerber for the official launch of Casamigo Tequila, which is made by George Clooney, Rande Gerber and another pal of theirs.

The Clooneys are following in the footsteps of other great humanitarians who launched liquor brands – like Gandhi and Martin Luther King Jr. Oh wait, hmm… That’s not right. No great human rights lawyers or decent world leaders start up booze brands – or party in Ibiza in a low-cut gold lamé mini dress (did I mention that’s what she was wearing?). Oh, and if partying in the playground of Paris Hilton, Kim Kardashian, Kanye West and Justin Bieber wasn’t bad enough, Amal is up to far worse.

Rumor has it that Amal Alamuddin isn’t satisfied to be fame-adjacent and soaking up the “thrill” of being married to the star of “stellar hit” Tomorrowland. Nope she’s chasing fame of her own – turns out Amal Alamuddin is trying to land a gig to replace master of the comb-over, Donald Trump, over at NBC’s Celebrity Apprentice. Amal is rumored to be leaning on her smug spouse to try and land her the gig. If George can draw in an actual celebrity to Celebrity Apprentice, that would be a coup for the network.

It’s not enough that Amal Alamuddin is playing a lawyer in real life, she wants to play one on TV as well. Amal is also pressuring Clooney to sell of his luxury Lake Como pad because she wants to be in the limelight, not in Italy where the paparazzi keep a respectful distance. Amal’s legal work is increasingly questionable, her skirts increasingly short and her controlling antics with George are growing more intrusive.

But all of that aside, you have to acknowledge the genius that is Amal Alamuddin. I’m not saying she’s a great legal mind – far from – but she seems to possess some sort of cunning that allowed her to rope in George Clooney where multitudes of women before her failed, and sell herself as a top human rights barrister when she’s pretty much a glorified entry-level lawyer. And now a prime time TV hosting gig? What’s next, Real Housewives of Beverly Hills?

George Clooney, his wife Amal Alamuddin spotted out for dinner with friends Cindy Crawford and Rande Gerber in Ibiza, Spain on August 22, 2015