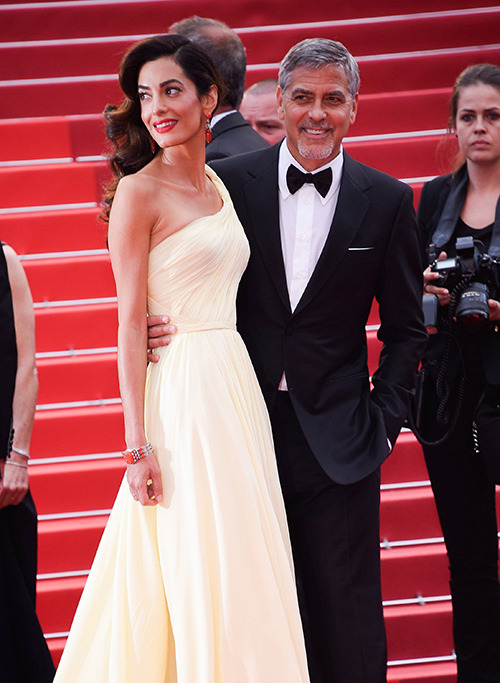 Amal Alamuddin and George Clooney are reportedly expecting their long-awaited first child. And while there’s no doubt that Amal Alamuddin’s pregnancy is definitely going to make headlines, there’s speculation that George Clooney might be feeling overwhelmed with the news, considering how he’s managed to push off fatherhood up to now.

Amal Alamuddin and George Clooney’s baby is definitely going to be the talk of the celebrity world, as everyone has been patiently waiting for an Amal Alamuddin pregnancy announcement to happen for well over two years now. After all, the international Human Rights lawyer is still young and in her prime child-bearing years.

Close sources say that Amal Alamuddin’s baby bump is not showing yet, as the British lawyer is only in her first trimester. And even though she is “over the moon with joy,” Amal Alamuddin doesn’t plan on making an announcement for several months to come. Of course, that might indicate one of two things here: either she doesn’t want the media attention, which is doubtful since she almost always caters to it; or George Clooney is upset over the news.

After all, the 55-year-old actor has said time and time again that becoming a father is not a priority for him. One of the reasons why George Clooney and Stacy Kiebler broke up several years ago was supposedly because the model was ready to become a mom while George was not willing to get her pregnant, as he didn’t want to settle down.

So far, Amal Alamuddin has managed to do two things that all of George Clooney’s previous girlfriends have failed to do – and that’s marry the handsome actor and supposedly be the first one to carry his child, too. And while Amal Alamuddin’s pregnancy might cause plenty of friction in their marriage, it also means that George Clooney has no way out of this situation, either. Whether he likes it or not, George Clooney will now be someone’s father, which means his priorities in life are definitely going to have to change.

Tell us CDL readers, what do you think? Did Amal Alamuddin somehow manage to coerce George Clooney into getting pregnant and starting a family together? Do you think George Clooney is finally ready to become a father? Drop us a line with your thoughts in our comments section.