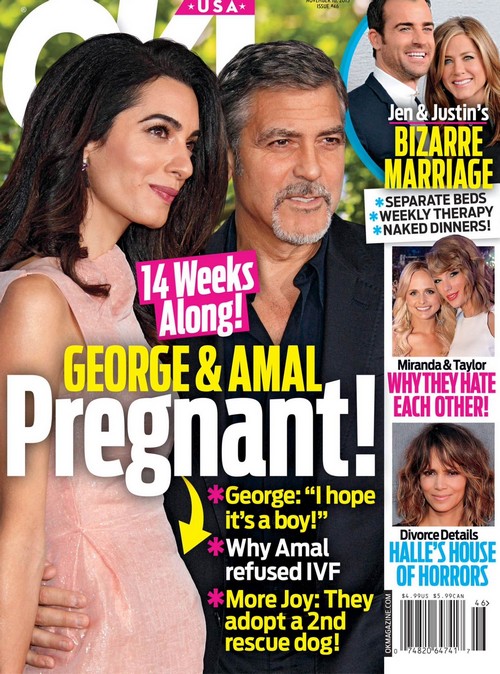 Amal Alamuddin is pregnant and hubby George Clooney is hoping for a baby boy! When the lawyer stepped out with George on October 27 for a movie premiere she was dressed in a body-hugging designer gown – and eagle-eyed onlooker noticed Amal appears to have the tiniest baby bump.

George Clooney is going to be a daddy an insider revealed to OK! Reportedly Amal is just past the three month mark but Clooney and Alamuddin want to keep things hush-hush just a little bit longer. The source explains that the couple is very nervous about any complications and will probably wait another month before sharing the baby news with anyone but family and close friends.

The newlyweds reportedly did not need to undergo in vitro fertilization – Amal was concerned what IVF would be too hard on her body. Baby Clooney was conceived the old-fashioned way and the couple is ecstatic! George is already watching out for Amal, asking her relax, eat healthy and put herself first for a change.

But the actor, producer and director hasn’t asked Alamuddin to quit working – George knows better than to put demands on Amal when it comes to her work as a world-renowned attorney. Though Clooney does worry about the dangers involved in her work, an insider says George knows nothing will stop Alamuddin for “doing what she does, not even a baby.”

That hasn’t stopped George from hiring a nutritionist to ensure Alamuddin eats properly during the entire pregnancy – keeping Amal and the baby healthy is George’s first priority. Clooney checks on Alamuddin regularly to ensure make sure she’s getting enough calories every day.

He doesn’t want to take any chances – when Clooney has to be away meals are delivered right to the door for Amal.

Even it’s very early on in Amal’s pregnancy – the couple doesn’t even know the sex of their baby yet – George already has plans for a nursery at both their English estate, the Italian villa and their Mexican vacation home. An insider says “[George] doesn’t want any limit to where they can live.”

George Clooney was a confirmed bachelor before he met Amal Alamuddin. The Hollywood bad boy has changed 100% in the past few years. Married to a beautiful and successful woman and his first baby has changed his life. Friends and family are certain George will make a great dad – and Amal will make an amazing mom.