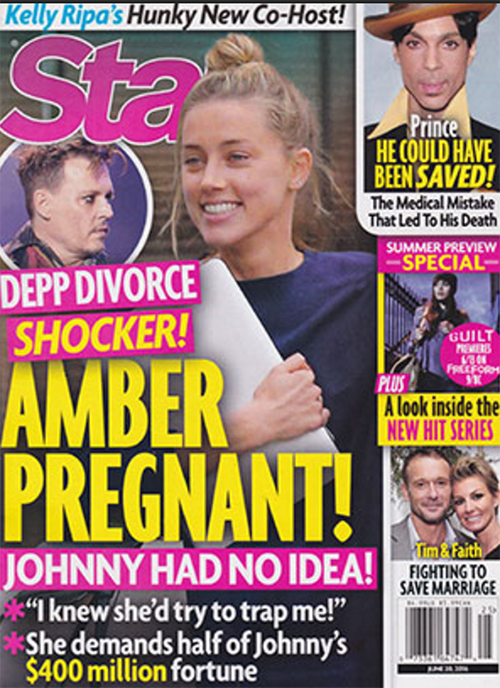 Is Amber Heard pregnant with Johnny Depp’s baby? Just when we thought the messy divorce and legal issues and abuse allegations for Johnny Depp couldn’t get any messier, this week’s cover of Star Magazine teases that Amber Heard is pregnant with Johnny’s baby! The cover of Star features a photo of Amber, smiling from ear to ear. The headline reads “Depp Divorce Shocker! Amber Pregnant!” The front page goes on to tease, “Johnny had no idea.”

According to Star Magazine’s sources, word among Johnny and Amber’s inner circles is that Heard may be pregnant with her first child. Yikes! Of course, Johnny is freaking out about the baby rumors. He already is convinced that Amber Heard is setting him up with abuse allegations to get millions from him in a divorce settlement. If there is a little Johnny baby bump, then Amber is set to receive a huge payday for the next 18 years.

Star Magazine’s sources revealed, “Amber would definitely fight tooth and nail to get full custody — and she’d be able to use the child to grab even more money in her divorce settlement. One minute they were supposedly in love, and the next they’re practically at war. It’s be a terrible situation to bring a baby into.”

It’s kind of hard to believe that Amber Heard would suddenly wind up pregnant NOW. She’s been with Johnny for years, the timing is a bit peculiar. But, stranger things have happened in Hollywood. If Johnny’s theory is true, and Amber Heard is trying to bleed his bank account dry, then perhaps once she realized she was pregnant she decided she didn’t need to be married to the actor any more?

What do you guys think? What are the odds that Amber Heard is pregnant? Do you think there is any hope for her and Johnny, could a baby save their troubled relationship? Share your thoughts in the comments below!