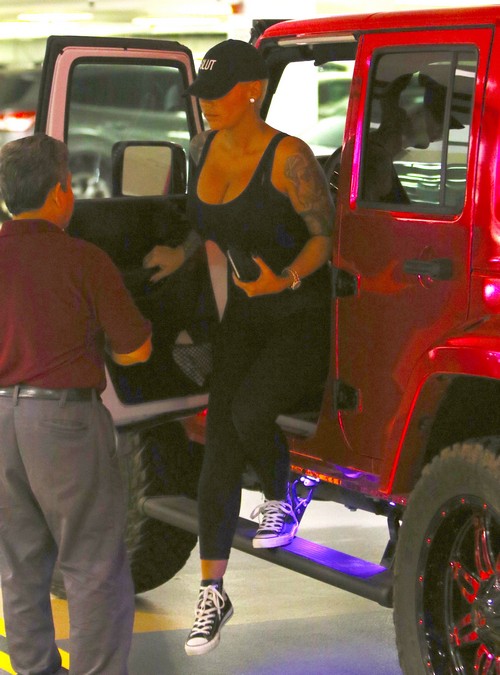 Amber Rose is getting her own talk show – should Kim Kardashian be worried? VH1 made an official announcement on Tuesday May 3, revealing that they had tapped Amber Rose to star in her own weekly primetime talk show, produced by Dr. Phil McGraw.

VH1 released an official statement about Amber Rose’s new gig. The network teased that the new show would consist of, “candid interviews with celebrity friends and lead provocative, entertaining and humorous conversations with guests about pop culture, motherhood, relationships, friendships, race, and entrepreneurship.”

VH1 general manager Chris McCarthy raved about Amber Rose joining the network, pointing out that she is an inspiration to women – and is constantly advocating for womens’ rights. Regardless of how she got here, you have to admit, it is pretty impressive that Amber made it all the way to where she is at – when ten years ago she was homeless.

And, she may have been a stripper, but she didn’t even have to make a sex tape (yes, that was a jab at Kim Kardashian).

Amber Rose took to Twitter and enthusiastically confirmed the news by tweeting, “I am very excited to be joining forces with such an amazing network to deliver a fresh perspective on the primetime talk show.  Join us as we break all the rules and redefine late-night. Watch out Fallon, here comes MUVA!”

Honestly, after all of her drama with Kanye West and her Twitter feuds with the Kardashian sisters – we are kind of interested to see what Amber has to say. Sure, she may have posed for a selfie with Kim Kardashian and made a half-hearted attempt to bury the hatchet, but Rose is a loose cannon and there is no telling what she will say on national television.

If we were Kim Kardashian we would be very concerned… This is the same Amber Rose who humiliated Kanye West recently by revealing details of their sex life together – so humiliating in fact that Kanye denied Amber’s accusations publicly and apologized for his insulting behavior that initiated Amber’s disclosure.

So, will you be tuning in to Amber Rose’s new talk show? Let us know what you think in the comments below!