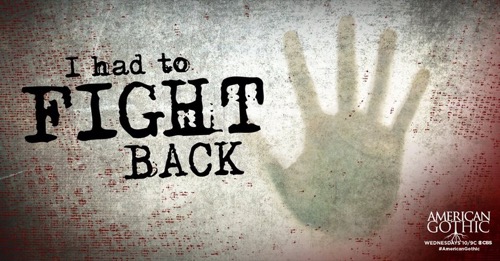 Tonight on CBS American Gothic airs with an all new Wednesday, August 31, season 1 episode 11 called “Freedom From Fear,” and we’ve got your American Gothic recap down below! On tonight’s episode, lies are exposed.

On the last episode, SBK’s accomplice resurfaced and caused panic in the city; Alison asked Brady to help clear her name. Did you watch the last episode? We’ve got your detailed American Gothic recap right here.

On tonight’s American Gothic as per the CBS synopsis “lies are exposed and the Hawthornes revisit the infamous night from 2002.”

American Gothic airs tonight at 10pm with an exciting episode, we will be live blogging the show with all the up-to-the-minute details so make sure to come back to Celeb Dirty Laundry and check out our live American Gothic recap. Can’t wait to see how all the drama plays out, how about you? Are you excited for this new show? Hit up the comments down below!

Tonight’s episode of “American Gothic” picks up seconds after Brady discovers Garret digging up the body of his friend Al and putting his bones through the wheat grinder. Brady tells Garret that he is under arrest but, instead of surrendering, he picks up a shovel and tells Brady that he refuses to go back to prison. Brady convinces him to lower the shovel and agrees that the two will just talk.

Tess, Alison and Cam confront Madeline about Caleb’s claims that Mitchell never dragged his body down the stairs. Madeline tells them about the silver bells that appeared in her purse. She says that they are all in danger. Agreeing to tell the whole story, she says that everything started with Alison. In a flashback, she and her siblings are teenagers and it is the holiday season. Mitchell tells Alison that she sent a box of payroll files instead of tax forms to the accounting firm the company uses. He tells the family that he is going over to the accounting firm to get the payroll files back.

Meanwhile, teenaged Cam is doing drugs with a friend. Back at the house, Tessa is sick and asleep in bed, after Madeline gave her some strong medicine. While in her room, Madeline asks Mitch if he was able to get the payroll files back and if the accountant realized what they were; when he says yes, Madeline tells him to either pay him off or call their lawyer. Later, a man is shown breaking into the house while Mitchell is on the phone with his lawyer. He climbs up the steps and when he reaches the top, Tessa sees him and pushes him down the stairs, killing him. In the present, Madeline tells her children that the man Tessa killed was SBK.

Meanwhile, Garret has just revealed to Brady that Tess killed SBK. In a flashback, Garret receives a call from Tessa and rushes home. He tells Brady that when he got home, there was a dead body on the stairs. After his parents told him the identity of the body, his parents convince him that they can’t call the police. In order to protect Tessa, Garret tells her that it was all just a bad dream. In the present, Tessa struggles to come to terms with having killed SBK. Madeline confirms for Cam that the body he saw dragged down the stairs was that of SBK, not Caleb. In the past, Cam pulls up to the house as SBK’s car pulls away. Cam is extremely intoxicated and climbs through his window, then sees Garret dragging the body down the stairs. Garret then put the body in the back of the car and went to the same place where he and Brady are now speaking. While he is digging the grave, he spots a symbol tattooed on the man’s chest. Suddenly, while he was digging, the man’s body disappeared.

SBK then attacks Garret, who uses the infamous knife to stab him multiple times. He tells Brady he kept the knife as a reminder that he had to do what he did or else he would have been the one that was dead. It is revealed that the grave is not Al’s, but SBK’s. In the flashback, Garret tells Madeline what happened. In the present, she tells the other kids that Mitchell was trying to get the files back which showed that he had been stealing money out of his employee’s 401K funds in order to finance a deal. In the flashback, he argues with his accountant, who turns out to be Morales. Morales tells Mitchell that he is turning the files over to the attorney general and Mitchell imitates SBK and strangles him with his belt. Garret sees a news program that is reporting a new SBK killing and knows it is impossible because he killed SBK earlier.

In the present, he tells Brady that hiding the body was never to protect Tessa; his father manipulated him so that he would have a scapegoat. Madeline tells her kids that Mitchell wasn’t SBK, he was just a copycat killer in the murder of Morales and that she kept the secret to protect their family. In the past, Madeline busts Cam with drugs as Garret confronts Mitchell about the murder. When Mitchell admitted he murdered Morales, Garret tells Madeline what happened. However, she refuses to call the police and forbids him to as well, telling him that he will also go to jail. He then left home. Cam meanwhile is buying heroin for the first time.

In the present, Madeline tells her kids that she and Mitchell thought it was over and had no idea that there was an SBK accomplice. Cam discovers a dollhouse that has been set up in the living room with dolls representing each family member, strangled in chairs. Garret tells Brady that he came to destroy the bones because Cristina is pregnant and he wants a chance to start a new life. Brady tells him that they can make a deal so that he won’t miss out on his child’s life as long as he cooperates and helps the police find the accomplice.

Back at the house, the family panics as they try to reach Garret. In the past, Madeline convinces Mitchell to not call the police about the SBK corpse on their stairs, and to kill Morales as a copycat murder, moments before Garret returns home because of Tessa’s call. It is then revealed that Madeline was with Mitchell when he tried to bribe Morales before killing him. Mitchell tries to strangle Morales but, when he can’t, Madeline strangles him instead. The two then tie him to a chair and wipe the murder scene clean. In the present, she tells her children that they are all victims of their father’s decisions.

Tonight’s explosive episode revealed that Mitchell was a copycat SBK and both he and Madeline were responsible for the murder of Morales, who they killed to avoid being prosecuted for their illegal business dealings. SBK had broken into their house to kill them but instead, was pushed down the stairs by Tessa. Believing he was dead, Madeline and Mitchell convinced Garret to bury the body: when the man woke up, the two struggled and Garret stabbed him, before burying him in the woods. Now, the original SBK’s accomplice is out to murder the whole family.