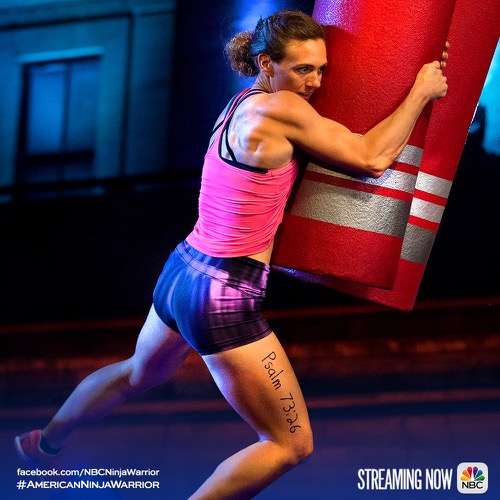 On the last episode, American Ninja Warrior returned to Oklahoma City, Oklahoma where the top 30 competitors from the City Qualifier tackled an even more challenging course that included ten obstacles in the City Finals. Did you watch last week’s episode? If you missed it we have a full and detailed recap, right here for you.

On tonight’s episode per the NBC synopsis, “American Ninja Warrior” returns to Philadelphia, Pennsylvania where the top 30 competitors from the City Qualifier tackle an even more challenging course that includes ten obstacles in the City Finals. For the first time in “American Ninja Warrior” history, four women will compete in the Philadelphia Finals. Top female ninjas Michelle Warnky, Rachael Goldstein, Jesse La Breck and Alyssa Beird will take on the course, along with fan-favorites Geoff Britten, Joe Moravsky, Jamie Rahn and Ryan Stratis.

In addition to the six already difficult obstacles from the Philadelphia Qualifier, contestants will face the Salmon Ladder, Flying Shelf Grab, Pipe Pyramid and Invisible Ladder. The competitors will vie for a chance to compete in the Las Vegas Finals, to win a cash prize of $1 million and the title of “American Ninja Warrior.” Matt Iseman and Akbar Gbajabiamila hosts as Kristine Leahy co-hosts.”

Tonight’s episode looks like it is going to be great and you won’t want to miss it, so be sure to tune in for our coverage of NBC’s American Ninja Warrior at 8:00 PM EST! While you wait for our recap hit the comments and let us know how excited you are about the show so far.

#NinjaWarrior tonight is the Philadelphia City Finals. There are a number of females competing tonight plus fan favorite veterans and hometown heroes plus Geoff Britten, the first to ever complete the Ninja Warrior Course.

She hops the steps, then moves to the Log Grip. The Paddle Bards are next and she falls but saves it and moves to the Wall Drop. She struggled but pulled that one out too. She’s now on Rolling Thunder and gets stuck then goes down. She’s out before she hits the wall.

Carl Fantauzzo is next and he moves rapidly through the steps, grip, wall drop, and then moves fast through Rolling Thunder. Now he faces the taller Warped Wall and at 5’2” it’s a challenge. He makes it! Now Carl is on the back half of the course.

He’s on the Salmon Ladder and moves to the Flying Shelf Grab where he loses it on the initial transition on the eighth obstacle.

Older Ninja Miles Avery went down on the Wall Drop. Greg Fleming, a three time vet, lost it on the Rolling Thunder. Eric Torres couldn’t make it up the Warped Wall despite a solid showing. Next up is Alex Dell’Aquila, the medieval times knight who is on a quest tonight.

We see a look at Alex’s job jousting at the dinner theatre show. He hopes the steps, conquers the Log Grip and the Paddle Boards and then makes quick work of the Wall Drop. He’s stuck on Rolling Thunder and falls but does a back flip so at least it was cool.

On the break, John Gowder Jr went boom on the Paddle Bards. Yancey Quezada went down on the Salmon Ladder. Tyler Cravens went down hard at the Log Grip. Fabio Figueiredo is next and the barber does well until he stumbles at the boards but he recovers and moves on.

On the Wall Drop, he misses the hand grabs but manages to pull himself up. It’s amazing. Now he’s on the Rolling Thunder. He struggles, gets stuck, and then tries another direction. He’s down and in the drink but went down fighting.

Young Michael Torres is barely old enough to run the course at 21 and was a super fast finisher in the qualifying round. He zips through the course and takes a roll off the Paddle Boards but is in good shape. The Wall Drop is easy and he moves to Rolling Thunder.

He moves fast on the wheel and make a smooth dismount and faces the Warped Wall. He’s up and onto the back of the course. He’s on the Salmon Ladder but looks tired. He makes the first pounce and swings for the big transition.

He lands it too and dismounts nimbly. Now he’s the first to face the Stair Hopper. He makes the transition up but then slides back when he swings up and goes down. It was a great run and very impressive for the very young rookie!

Next of the final four ladies and Weather Man Moravsky

Next up is Rachael Goldstein, the second woman to run tonight and her brand new fiancée is with her. She’s on the steps and is hopping along. She nails it and moves to the Log Grip and past that and faces the Paddle Boards. She falls and recovers.

Now she’s at the Wall Drop and gets stuck on the transition but slips and falls. It was a good effort but her height was her enemy since she has less reach. Next up is Joe Moravsky, the Weather Man, who has never failed to complete a city final.

He zips through the first three obstacles and then moves to Wall Drop and to Rolling Thunder. He nails an early dismount and runs right up the Warped Wall. He moves up the Salmon Ladder so fast and then is on the Flying Shelf. Now it’s the Stair Hopper.

He moves up and then lands a smooth transition and will face the Invisible Ladder. He struggles and falls short five feet away – this is the first time he hasn’t finished a City Finals course.

Najee knocks it out!

He dismounts and moves to the Warped Wall. Najee is up that with an amazing leap at the top – that was a move like a boss. He’s up the Salmon Ladder fast then on to the Flying Shelf. He lands it and is on to the Stair Hopper and is already guaranteed a ticket to Vegas.

The rod rolls on him and down he goes – he had more gas in the tank but the obstacle was just trick and has taken down all but one Ninja so far tonight.

Captain NBC flies through the course

Brandon Pannell went down on the Shelf Grab. Fastest qualifying finisher Anthony DeFranco, went out on the Shelf Grab too. Mike Bernardo was taken out by the Shelf Hopper. With 20 runs done, there have been no finishers next. Is a hero the answer?

Jamie Rahn, Captain NBC, is next. He zips through the course up to the Warped Wall and runs right up it at two and a half minutes. Now he’s up the Salmon Ladder and he goes fast through that and does the Shelf Grab with ease.

Now it’s the Stair Hopper. He got really aggressive and moved fast through the downward ones but then missed on the fifth jump and went right into the drink. He says he had to go quick so he had the strength to finish and fell hard.

Veteran Michelle Warnky runs the course next. She zips through the first obstacles and then faces Rolling Thunder. She loses it and falls right before she can transition. Michelle says it’s bumpy and heavy and she just lost strength.

Chris Wilczewski is up next and his results have been very inconsistent over the past several seasons. He runs through the first few obstacles, tackles Rolling Thunder and lands a solid dismount to face the Warped Wall. He lands that and moves to the back of the course.

He conquers the Salmon Ladder and the Shelf then right up the Stair Hopper. He’s now on the Invisible Ladder and starts his 30 foot climb. He’s bouncing and struggling and so close. Chris falls with just a few feet left and made the best climb of the night so far.

On the break, Jon Alexis Jr went down on the Stair Hopper but is happy he’s going to Vegas. Ryan Strais wowed the crowd and went to the back of the course but also fell on the Stair Hopper. The final female of the night, Jesse LaBreck is up next.

Flex LaBreck is the woman who takes care of a young woman with cerebral palsy. She gets stuck on the Log Grip dismount and comes off it a little tired. She looks at Emmaline, the girl she cares for, and faces Rolling Thunder. No woman has made it past this one.

She tires and looks for a chance to dismount. Jesse now faces the Warped Wall and runs right up it. She nailed it and moves to the back of the course. She’s the fifth woman ever to make it up the Warped Wall. She’s on the Salmon Ladder and all the way up.

She makes the first jump on the Shelf Grab then the second and nails the dismount. She will make it to Vegas as a rookie! Now it’s the Stair Hopper. She hits the gap halfway through and falls but it was an amazing run. She killed it and will be the POM run of the night.

Geoff hopes the steps with ease, beats the Log Grip, and stumbles on the Paddle Boards. He’s rolling along fast on Rolling Thunder but almost slips and saves it. He dismounts and faces the Warped Wall. He makes it up easily and moves to the Salmon Ladder.

He’s on the Stair Hopper and slips and goes down at the same spot that Flex LaBreck did. No one completed the Philadelphia City Final! Wow. This course was brutal. He says he still doesn’t know why he fell and says he’s scared to go to Vegas if it’s that much harder.

Moving to Vegas from the Philly City Final are: