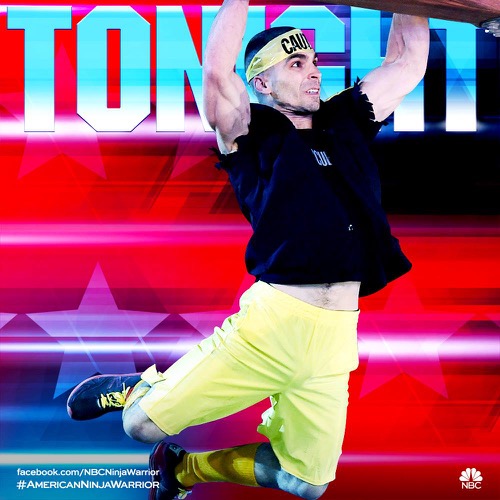 American Ninja Warrior, NBC’s obstacle course competition airs tonight with an all Monday, August 29 season 8 episode 11 called “National Finals Week 1,” and we’ve got your American Ninja Warrior recap down below! On tonight’s episode, the finalists head to Las Vegas, where they tackle the first stage of a four-stage course modeled after the Mount Midoriyama course in Japan.

On the last episode, American Ninja Warrior” returned to Philadelphia, Pennsylvania where the top 30 competitors from the City Qualifier tackled an even more challenging course that included ten obstacles in the City Finals. Did you watch last week’s episode? If you missed it we have a full and detailed American Ninja Warrior recap, right here for you.

On tonight’s episode per the NBC synopsis, “American Ninja Warrior” travels to Las Vegas, Nevada where the top competitors from the City Finals tackle the four-stage course. Competitors will take on Stage One with four new obstacles Snake Run, Giant Log Grip, Broken Bridge and Flying Squirrel. The finalists will vie to win a cash prize of $1 million and the title of “American Ninja Warrior.”

#AmericanNinjaWarrior tonight is part one of the Vegas finals. Stage one must be completed in 2:20 starting with Snake Run then Propeller Bar, Giant Log Grip, Jumping Spider, Sonic Curve, and the much tougher Warped Wall then Broken Bridge and the Flying Squirrel.

Ryan Stratis is up first tonight and the Kennesaw, Georgia native is a veteran from every former season. Mike Bernardo talks about his beard. Stratis is off to a good start but swings or while on the Propeller. He lands the Log Grip and moves on but has a wet foot as he faces the spider.

He’s through it like a charm and heads for Sonic Curve. He’s up the Warped Wall but time is running out. He falls off the Flying Squirrel with 20 seconds left in the last obstacle. Next up is Jojo Bynum and this is his third year in Vegas finals with his loud cheering section.

He got tangled on the Propeller but corrects. He misses the landing pad on the Log Grip and screams in frustration when he lands in the water.

She nails the first obstacle and moves to the Propeller Bar. She’s stuck on the landing but works it out and moves to the difficult Giant Log Grip. She landed but then bounced right into the water and missed the mat. That will end her Vegas hopes this year.

Farmboy Casey Suchocki dashes up the steps to the Propeller and nails it fast then moves to the Log Grip. He nails the landing and moves to the Jumping Spider. He slides down, lands then falls off the mat thanks to balance issues. So close!

On the break, lawyer Mike Chick fell on the Propeller Bar, beekeeper Liam Buell fell on the Sonic Curve, and Alexio Gomes missed the landing on the Log Grip. Next up is his brother Lucas Gomes. This is his first Vegas and he falls off the last step on the first obstacle. Bummer.

Starbucks barista prepares to brew up a good run

Brandon Pannell is next and his estranged father is on hand to watch. He races through the steps and moves to the Propeller then the Log Grip. The Jumping Spider takes him down, though, as he slides right down.

On the break, teacher Allyssa Beird ran and fell on the Propeller bar. Karsten Williams, a three time Vegas veteran went down in the Jumping Spider and Justin Hillsten missed the dismount on the Giant Log Grip and flew past the landing pad.

Flight attendant Grant McCartney is next and he dances at the start line. Grant starts his run and gets past the first three then moves to the Jumping Spider. He makes it and moves to the Sonic Curve. He sticks that too and heads for the Warped Wall and is up it.

The Broken Bridge almost takes him out but he does it and faces the Flying Squirrel. He makes the transfer and then jumps for the net. He lands and climbs. He slaps the buzzer with four seconds left and does a cool little victory dance. Grant is the first finisher!

Another woman and Travis Rosen run it

Spartan race Rose Wetzel went out on the Propeller Bar. Chris Boehm the Ginja Ninja went down on the Broken Ridge. Six-time vet James McGrath was again taken out by the Spider. Tennessean Travis Rosen is a Vegas veteran legend who has made it to Vegas stage two five times.

Shockingly, he went down on the Snake Run – the very first obstacle. Wow. His family is crushed and the crowd is stunned into silence. His foot went right past the step and he went down hard. Tyler Yamuchi is a lot of power in a small package at just 5’1”.

He’s the shortest Ninja to make it up the higher warped wall this year and also wants to beat the Jumping Spider. He beats the first obstacle and the gymnast easily smacks down the Propeller Bar then moves to the Log Grip and lands that too.

He faces the Jumping Spider. He rolls right through it. Wow. Now he faces the Sonic Curve then the Warped Wall and just misses. He misses the second time too. He can’t get it. He’s too tired to make it up and his time runs out while he tries and fails one last time.

This course has turned out to be a Ninja killer so we’ll see how Jamie Rahn does it. He’s got his caped costume on and his green hair and is ready to go. The four-time national finalist starts out strong. He’s moving fast when he hits the Log Grip and misses the mat. Whoa.

This Vegas final is knocking out veterans like flies. Rookie Micahel Torres is next and is the youngest competitor this season and in Vegas. He hits the Log Grip with two minutes left and nails the landing. Now the Jumping Spider and he kills it.

He’s perfect on the Sonic Curve too and then faces the Warped Wall and is up it the first time. Now it’s the Broken Bridge and he stumbles but recovers and heads for the Flying Squirrel with thirty seconds left. He lands the net but the climb tangles him and he slaps the buzzer with less than eight-hundredths of a second left. Wow. The rookie is the second finisher!

Flex Labreck is bitten by the spider!

Mike Bernado ran on the break and the firefight went down on the Propeller Bar. Ryan Robinson struggled through his run and fell short at the final net jump. Michelle Warnky, one of four women from Philly finals, fell from Propeller Bar.

Jesse Lebreck is up next and Flex is ready to run this. She starts slow on the Snake Run and lands the Propeller Bar with ease. Now it’s the Log Grip and she nails the landing too. She moves to the Jumping Spider. Only two women have made it through this.

She lands solid then loses her footing and falls. Flex Labreck is out of it. Next is five time veteran Brian Arnold. He runs past the first three obstacles easily and faces the Jumping Spider. He moves through it fast and sticks the landing and faces Sonic Curve.

Brian Arnold proves the fifth time is the charm

He faces the Warped Wall and up and over then on to the Broken Bridge and then the Flying Squirrel. He lands on the cargo net and climbs. He slaps the buzzer with 14 seconds left for the fastest time of the night so far and will move on for the fifth year in a row.

Veteran Chris Wilczewksi struggled on the Sonic Curve and it costs him time. He heads for the Warped Wall and barely nabs it. He’s almost out of time though as he moves to Broken Bridge. He falls hard on the dismount and leaps on the Squirrel.

He’s got less than 30 seconds left. He hits the net with 20 seconds left. He climbs and slaps it at eight second. It wasn’t elegant, but Chris got the job done. Veteran Kevin Bull is up next and he’s got a new job with a trampoline park with locations around the world.

Kevin Bull is also taken out by the Giant Log Grip. That’s another veteran taken out on this early obstacle. Wow. This Vegas course is a killer!

Daniel Gil takes his perfect hair for a run in Vegas

Erica Cook ran and fell pretty to the Log Grip also Thomas Doweidt fell hard on Snake Run early on. Dan Polizzi, the firefighter, fell on Sonic Curve. Daniel Gil, the ninja with the best hair, is up next. Daniel runs fast past the Snake Run and twirls on the Propeller.

He sticks the landing on Log Grip and moves on to the Spider and coasts through that and thJe ae Sonic Curve. He runs right up the Warped Wall and faces the Broken Bridge. He’s at the Flying Squirrel and making good time.

Daniel Gil slaps the buzzer with 15 seconds left to take the top time. His pal Thomas Stillings is running next and now has more pressure in their friendly rivalry to top that. Thomas faces the courses and the Parkour teacher looks ready.

He is through the first obstacles and then is past the Spider and moves to the Sonic Curve and Warped Wall. Daniel cheers him on. He falls hard on the Broken Bridge and may have hurt his knee. He lands on the Cargo Net and climbs. His time is at 27 and he beats Daniel by 12 seconds. Wow!

A veteran falls and another inspires

Next is Ian Dory who shockingly goes out on the second obstacle – the propeller. Another veteran taken out early. Flip Rodriguez is up next. He is speeding through the course and has 1:30 left when he faces Sonic Curve.

He’s up the Warped Wall and moves on with almost a minute left. He runs past the bridge and is on the Flying Squirrel. He lands with 15 seconds left, climbs the net, and slaps the buzzer with almost 5 seconds left.

Jessie Graf is the last run of the night!

She hopes the first obstacle and nails the Propeller fast. Now it’s the Log Grip. She sticks the landing and moves on. It’s the Jumping Spider next and she sticks that too. She lands the Sonic Curve. Now it’s the Warped Wall.

She gets it on the first try! She is past the Broken Ridge and has one obstacle left. She nails the net and moves on. She’s got it. She hits the buzzer with 12 seconds left and is the first woman to ever complete Stage One in Vegas.

Not surprisingly, she’s awarded the POM wonderful run of the night. The crowd goes wild for her. Jessie says she didn’t believe it would happen until she saw it. Wow. Jessie did what so many male veterans this year could not.

Finishers from stage one in Vegas

Out of eight finishers, Jessie was the fourth fastest. Very impressive.