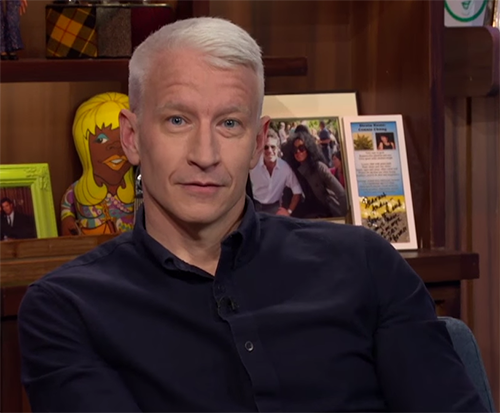 Anderson Cooper won’t be sitting next to Kelly Ripa as co-host of ‘Live!’ The newsman just signed a long-term contract with CNN. Seems no one wants to work with the talk show diva, not even Kelly’s best buddy Anderson.

Expect to see Anderson Cooper take a seat next to Kelly on Wednesday, October 12, and Anderson will reportedly be happy to fill in from time to time if needed. We wonder if there will be any tension between the two now that Anderson has effectively closed the door on any offer to be Kelly’s permanent co-host.

Michael Strahan blindsided Kelly Ripa in April when he was jumping ship in September for a better job at ‘Good Morning America.’ Strahan ended up leaving ‘Live!’ in May rather than in September. There was just too much animosity between Kelly and Strahan for the two to continue to work together.

Anderson Cooper is officially out of the running for the permanent spot next to Kelly Ripa. Who is on the short list of second choices? Rob Lowe’s name had been tossed around. The actor was scooped up by CBS for the sophomore year of ‘Code Black’ as Dr. Ethan Willis after the cancelation of the Fox comedy ‘The Grinder.’

Another name tossed around has been nearly-retired NFL player Kroy Biermann. The star of Bravo’s ‘Don’t Be Tardy’ was recently cut by the Buffalo Bills and is basically unemployed. Kroy’s wife, Kim Zolciak, publicly stated she thinks Kroy would be a perfect co-host for Kelly.

At one time, there was discussion that Kelly’s husband, Mark Consuelos, might take the seat next to his wife. Mark’s a too busy now for that – he’s starring on the Fox drama ‘Pitch’ as San Diego Padre’s front office man Oscar Arguella. Mark recently wrapped up a run as Teo Aljarafe on ‘Queen of the South.’

Grammy Award winning singer Josh Groban and actor Jerry O’Connell rounded out the final week of September as co-hosts of ‘Live!’ Is it possible that viewers will see either Groban or O’Connell seated next to Kelly Ripa permanently?

Fred Savage and Neil Patrick Harris, along with Anderson Cooper, will rotate the ‘Live!’ co-hosting job. Harris recently stated he has absolutely no interest in taking on the job full-time. Kelly Ripa reportedly blocked the choice of Fred Savage as a permanent host – Kelly’s allegedly holding out for a bigger and better celebrity. What do you make of this news, CDL readers? Leave your thoughts in the comments section below. We want to hear from you!