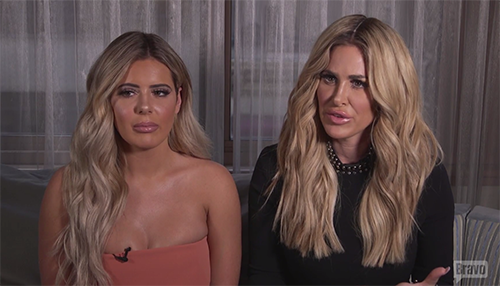 There is a possibility that Kelly Ripa may get another athlete as the new co-host of ‘Live!’ Kroy Biermann doesn’t have a steady job after being cut by the Buffalo Bills and Kim Zolciak thinks Kroy would be a perfect fit for the co-host job.

Former ‘The Real Housewives of Atlanta’ and current ‘Don’t Be Tardy’ star thinks Kroy would be a perfect fit as Kelly Ripa’s new co-host on ‘Live!’ Kim went public with the declaration in an interview with Daily Dish.

Before Kroy goes running off to audition for ‘Live!’ the professional football player needs to be certain his playing days are over. The Buffalo Bills were probably Kroy’s last hope of playing in the NFL. Unless Kroy plans to sign with a team in the CFL, he can say goodbye to professional football forever.

Does Kelly Ripa really want another athlete as a ‘Live!’ co-host? Michael Strahan bailed on Kelly for a better job with ‘Good Morning America.’ What’s to say Kroy wouldn’t jump ship for a higher paying job if ESPN or the NFL Network come calling?

Daily Dish caught up with Kim and the former ‘RHOA’ and current ‘Don’t Be Tardy’ star revealed, “Kroy’s very well spoken. I’ve always said, ‘You should do broadcasting. I told him he should try out for that ‘Live! with Kelly’ [co-hosting job]. I was like, you should do that.’”

Kim and Kroy need a serious influx of cash at the moment. It doesn’t appear that the money from ‘Don’t Be Tardy’ as well as the couple’s various business just is enough to cover the Biermann Bunch’s expenses. Especially since Kim Zolciak and daughter Brielle Biermann have an expensive obsession with lip injections and plastic surgery.

If Kroy Biermann doesn’t get the job as Kelly Ripa’s new ‘Live!’ co-host, then Kim thinks the NFL player would make a fantastic coach. In the interview, Kim gushed about what an incredible ability Kroy has to teach. Kroy patiently taught the couple’s son KJ to ride a bicycle, which apparently qualifies him to be a professional football coach.

Kroy Biermann is no stranger to television and egotistical blondes. If Kroy can handle life with Kim Zolciak, he can handle five hours a week sitting next to Kelly Ripa as the co-host of ‘Live!’

Always working!!! @kroybiermann always has perfect form that’s what I need help with! 😫 Kroy spends hours and hours training .. When you love what you do it’s easy ❤️