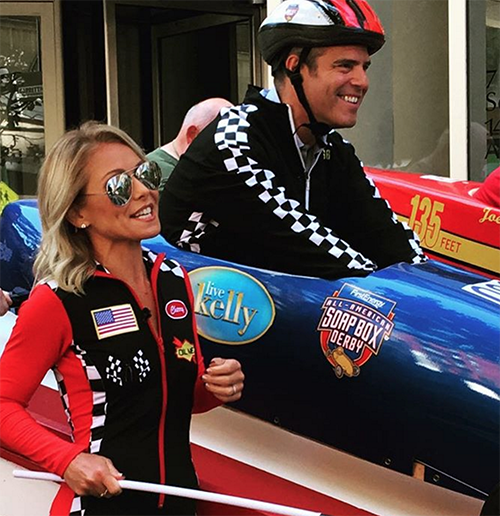 Kelly Ripa’s talk show career is in deep trouble. Even though Kelly Ripa supposedly likes her new show format with a rotation of guest co-hosts, there’s a good chance that the outspoken blonde might be without a job if she doesn’t find her Michael Strahan replacement sooner than later.

Kelly Ripa won’t admit to it, but there’s no doubt that she’s humiliated over the fact that she still can’t find anyone in the entertainment industry to work with her on her Live! morning talk show. Kelly Ripa’s vindictive and jealous behavior after finding out that Michael Strahan had been promoted to a new role in ‘Good Morning America’ has made her one of television’s most hated personalities.

Kelly Ripa’s shameful behavior, which included embarrassing Michael Strahan on air by bringing up his divorces with cheap shots, showed her true colors. Many viewers have threatened to stop watching Live! altogether because of Kelly Ripa’s unprofessionalism towards Michael Strahan’s departure. And now that Kelly Ripa can’t even find a decent replacement for her former co-host, her show might be given the axe altogether.

Yet, according to Entertainment Tonight, sources close to Kelly Ripa say that she’s in no hurry to find a Michael Strahan replacement and that she prefers to have multiple guest co-hosts instead. One source dished, “The show is going to stick to doing a round robin shuffle of guest co-hosts for the time being. Kelly likes the dynamic right now, so they’re not in a hurry to make a decision anymore.”

What’s more, the insider added that a co-host might not be named until at least November. Of course, with so many young celebrities vying for a coveted spot on a nationally syndicated morning talk show like Live!, it shouldn’t be hard for producers to find a suitable candidate for the spot. The problem, of course, is Kelly Ripa and that no one wants to take the chance of working beside her.

Kelly Ripa can claim to enjoy her rotating list of co-hosts all she wants, but by the time November comes, she still won’t have a permanent co-host ready to work with her. The damage with Michael Strahan’s departure has already been done and it will only be a matter of time before the show is canceled altogether.

Kelly Ripa can’t anchor the show on her own and viewers will soon grow tired of seeing multiple guests seated next to her every week. Kelly Ripa can pretend that she has everything under control, but her critics definitely see right through her. Do you agree, CDL readers?