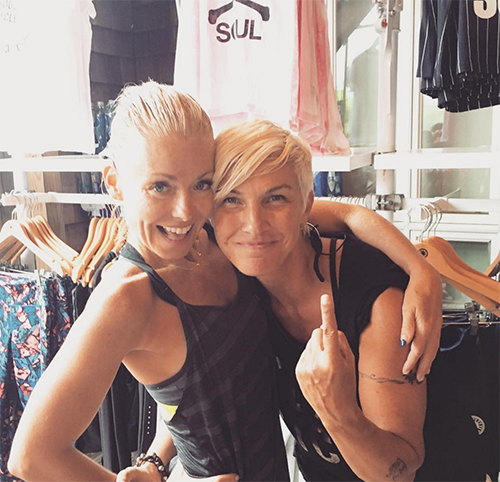 Kelly Ripa’s diva demands are out of control. The petite morning television talk show host can’t find a replacement for her former co-host Michael Strahan, but she has somehow managed to promote herself even though her show’s future might be in jeopardy.

There’s no doubt that Kelly Ripa has had one very stressful summer as she can’t find anyone in the entertainment industry willing to work with her, let alone support her. Kelly Ripa’s vindictive and immature behavior after it was announced that Michael Strahan would be leaving her for a more lucrative position with ‘Good Morning America’ showed viewers her true, ruthless colors. And that’s probably why any celebrity with good sense has been staying away from her, as she can’t seem to find a Michael Strahan replacement even though the new season for her morning talk show is only a few weeks away.

After hearing that Michael Strahan would be moved to ‘Good Morning America,’ Kelly Ripa refused to return to work and when she did, she embarrassed and ridiculed him on air, forcing her co-star to leave earlier than anticipated. It’s no wonder that everyone in television is avoiding Kelly Ripa like the plague.

Yet, Kelly Ripa has managed to do the unimaginable by getting ABC to promote her to executive producer of her talk show, despite the fact that its future is still questionable. And if that weren’t enough, Kelly Ripa is still managing to shade Michael Strahan so many months later.

A ‘source’ told Page Six that Michael Strahan’s sudden departure caused a heavier workload for Kelly Ripa and her crew. One unidentified source told the site, “The team had fewer days off this summer than they usually do. Most shows are on hiatus in August and [the ‘Live’ team] ended up working. They did more shows in August than they normally would have.”

Of course, if it weren’t for Kelly Ripa’s spiteful nature, Michael Strahan wouldn’t have been forced to leave earlier than scheduled. Kelly Ripa made his life on set a living hell by embarrassing him with her standoff and bringing up his multiple divorces on air.

Kelly Ripa and her crew wouldn’t have had to deal with multiple co-stars all summer long if she would have treated the situation with a little more dignity and respect. Michael Strahan didn’t owe anyone an explanation for his promotion to ‘Good Morning America,’ as it was a matter between him and Disney execs. Kelly Ripa’s behavior and apparently her own executive producer promotion just goes to show how jealous she really is of her former co-star. What do you think, CDL readers?