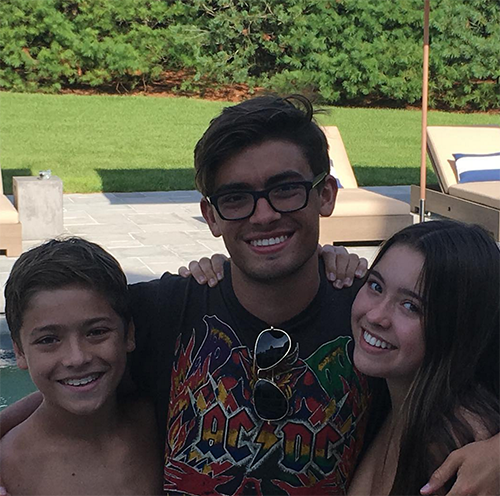 Kelly Ripa and Mark Consuelos are dealing with some major family heartbreak. The television stars have revealed that they are going through some changes within their home right now as their eldest son Michael Consuelos heads off to college.

Kelly Ripa has long worked hard to keep up her ‘happy family’ image to the public. Kelly Ripa has the perfect marriage to her husband Mark Consuelos and her three children, 19-year-old Michael, 15-year-old Lola, and 13-year-old Joaquin have managed to stay out of the tabloid headlines despite their parents being two big celeb names.

But with all the changes that have been going on in Kelly Ripa’s life right now, including her nasty feud with former Live! co-star Michael Strahan and her struggles in finding a replacement for him, seeing her son leave for college might be the worst thing she’s dealt with all year long. After all, there’s no doubt that Kelly Ripa is like most mothers when it comes to seeing her first-born child head off to college: emotional and completely over-the-edge.

Kelly Ripa shared an Instagram post of her three children and captioned it with, “Saying goodbye to big bro, the college freshman (whilst conspiring to take over his bedroom).” Yet, many critics already think that Kelly Ripa might be over exaggerating her supposed “heartache,” as Michael Consuelos will be going to college in New York City and not far from where his mother works on a daily basis. Plus, it’s unimaginable that her two younger children would be vying for their older brother’s bedroom when Kelly Ripa and Mark Consuelos live in one of the priciest homes in New York City.

The couple lives in a $27 million dollar penthouse on the Upper East Side, just east of Central Park, that they purchased back in 2013. Michael Consuelos will have every opportunity to make it home every weekend to be with his parents Kelly Ripa and Mark Consuelos.

As many fans already know, Kelly Ripa has a hard time dealing with change, as was definitely the case when Michael Strahan left her show earlier this year. And as close as her son Michael Consuelos will be, there’s no doubt that she’s dealing with some major anxiety, especially since her son will be living on his own for the very first time.

While Kelly Ripa likes to keep it together on the exterior, there’s a good chance that she’s going through a few sleepless nights trying to figure out how she can keep both her career and family life on track with all the changes she’s been through. What do you think, CDL readers? Do you think Kelly Ripa is going to pull this one through?