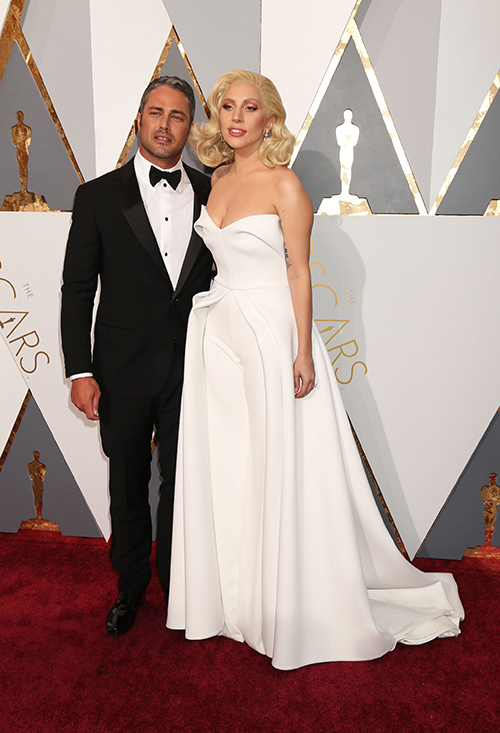 Is Lady Gaga a married woman? Lady Gaga and Taylor Kinney have been engaged for over a year now – and the couple hasn’t seemed to be in any hurry to rush down the aisle and say “I Do.” Whenever Taylor or Lady Gaga are questioned about setting a wedding date in interviews, they both have given pretty dodgey responses. Could that be because they are already secretly married?

Over the weekend, Lady Gaga and Taylor Kinney were spotted out and about with what appeared to be matching wedding bands on their ring fingers, spurring debate on social media that the couple had a secret wedding and neglected to make a formal announcement that they were married.

According to Naughty Gossip’s inside sources, “They are not officially married yet. They both wear the rings and consider themselves a married couple, but legally they are not. The big day is coming soon and once they say ‘I DO’ they plan to tell everyone.”

It sounds like Gaga and Taylor may have done what many celebs do: gotten legally married but choosing to deny the nuptials until they have a major blow-out wedding with star-studded attendees. Lady Gaga does everything big. We can’t imagine her having a super secret wedding with no guests. This is the same woman who wore a dress made out of meat. “Low key” isn’t really her thing.

With Gaga’s busy singing career plus her stint on ‘American Horror Story,’ combined with Taylor Kinney’s busy schedule on ‘Chicago Fire,’ it really doesn’t come as a surprise that they haven’t been able to plan an official wedding. But, the mystery remains, are they or aren’t they legally married now? You have to admit that it seems a bit strange that they call themselves married and wear wedding bands – but haven’t actually had a wedding.

What do you guys think? Did Lady Gaga and Taylor Kinney have a secret courthouse wedding? Are they trying to keep it quiet until they actually can set a wedding date? Share your thoughts in the comments below!