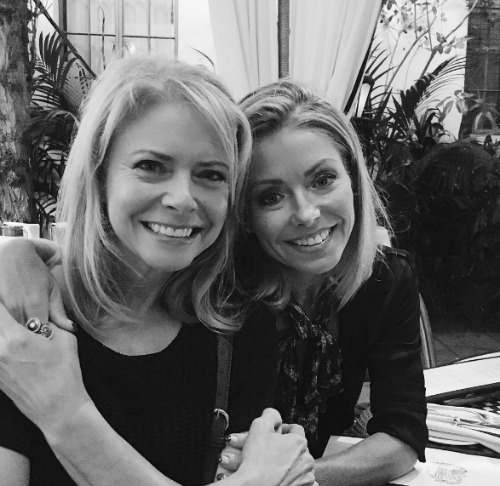 Kelly Ripa’s television career on ‘Live With Kelly’ is in hot water. There’s new speculation that Kelly Ripa might find herself without a morning talk show or worse, in the unemployment line, as she’s struggling to find a replacement for her former co-host Michael Strahan.

Kelly Rippa and Michael Strahan’s professional relationship took a turn for the worse when the blonde television star was left blindsided over the news that her co-host would be leaving her to join ‘Good Morning America’ instead.

Kelly Ripa made it clear that she didn’t appreciate being left out in the dark when Disney executives negotiated a new contract with Michael Strahan behind her back.

What’s more, Kelly Ripa made Michael Strahan’s last days on ‘Kelly and Michael Live’ almost unbearable with awkward jokes and quips about his personal life, which includes his multiple divorces by saying on air, “There’s a great article in the paper and I want to get your take on it, because I don’t have a take on it. But I want yours. So you’ve gotten divorced. And anybody here, like, gotten divorced?”

After the way Kelly Ripa treated and humiliated Michael Strahan, it should come to no one’s surprise that her co-host chair is still empty. Kelly Ripa has tested out several potential Michael Strahan replacements over the summer, but so far none have worked out. This is mostly because everyone is well aware of the stigma that comes with working with a high-maintenance diva like Kelly Ripa.

The television host’s jealous and immature behavior upon hearing Michael Strahan’s transfer to ‘Good Morning America’ has made her one of the least likable figures on television.

According to Naughty Gossip, Kelly Ripa managed to bring in ratings while Jimmy Kimmel co-hosted her show with her this summer, although there’s little chance that he would leave his coveted late night talk show to join her in the mornings.

Knowing how much Kelly Ripa will use her star power and demands to keep her show on the air for as long as she can, it will only be a matter of time before she is potentially pink-slipped by ABC and Live With Kelly closes its doors.

Apparently, Kelly Ripa can’t carry a show on her own and if she doesn’t fill Michael Strahan’s job, then her morning television show will be in jeopardy. Many viewers have seen Kelly Ripa’s true, vindictive colors by the way she treated Michael Strahan before his departure.

Tell us CDL readers, what do you think? Does Kelly Ripa have a chance of surviving solo on television? Will her show be canceled if she doesn’t find a replacement for Michael Strahan? Let us know what you think in our comments section below.

I’ve been spinnin my wheels with this lady right here for ten years! Thank you @staceygnyc for being the baddest chick I know. 🚴🏽💦💀💖

I like my cars the way @abtvhd likes his women. Vintage. 🍊🍑🏁