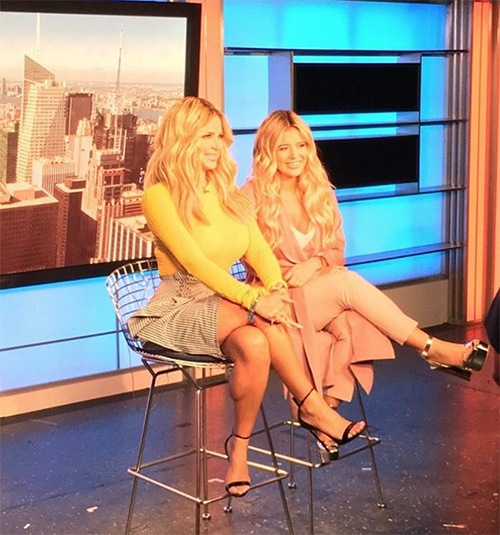 Kim Zolciak and Kroy Biermann divorce reports are beginning to make headlines once again as the couple is dealing with a major crisis on their hands. In fact, there’s speculation that a Kim Zolciak divorce will happen sooner rather than later as her husband Kroy Biermann has no doubt had enough of the reality television star’s plastic surgery obsession along with their current financial crisis.

Kim Zolciak and Kroy Biermann’s marriage has always looked picture perfect on the outside, with the former ‘Real Housewives of Atlanta’ star sharing photos of how happy the couple always look on her multiple social media accounts. But now that Kroy Biermann is unemployed after he was cut from the Buffalo Bills, there’s a good chance that the former NFL star is worried about his family and finances, especially since he has supposedly been financing Kim Zolciak’s plastic surgery obsession.

Kim Zolciak and her daughter Breille Biermann were spotted looking nearly identical in matching latex ensembles at New York Fashion Week. Many critics couldn’t help but notice that the mother and daughter duo’s appearances have changed drastically in the last several weeks, as 19-year-old Brielle Biermann looks like the spitting image of her reality television star mother. And while both Kim Zolciak and Brielle Biermann have denied going under the knife, many critics can’t help but point out the duo’s bizarre, chemically enhanced facial features, which have drastically changed over the years.

Surely, things won’t be going well for Kim Zolciak and Kroy Biermann if the television star continues to be in denial over her extreme spending habits, especially now that her husband is no longer playing professional football. At 38, Kroy Biermann can’t compete with the younger NFL stars in his profession, making it even harder for him to find another team to play for.

Knowing how much the RHOA star and her six kids are dependent on Kroy Biermann’s NFL career, there’s a good chance that he will sooner or later break under pressure, especially since he has a family of eight to feed and house every night. Plus, Kim Zolciak is not making it easier on her husband with her lavish spending habits and luxurious lifestyle, which has certainly put a huge dent in the couple’s budget.

Tell us CDL readers, do you think a Kim Zolciak and Kroy Biermann divorce will happen if the NFL star doesn’t find another team to play for? Will Kroy Biermann leave Kim Zolciak if she continues to spend whatever is left of his money? Is Kim Zolciak’s plastic surgery obsession getting out of hand? Let us know what you think.

HAPPY BIRTHDAY TO MY ❤️ and SOUL! I love you far beyond what words could ever describe! Im so flippin fuckin excited for what’s about to come 😉 to the VERY best husband and father on this entire planet!!! You are what dreams are made of!!! #ofCourseIHaveMyPeriod #NikiSaidItsNotOurSheets #True #HAPPYBIRTHDAY #TightAss #My❤️ #KroyIsWhatEveryManNeeds2be

We were so excited to be here tonight! You guys have to check out Strut on Oxygen it’s a new show all about transgender models who are simply stunning ❤️ executive producer is the amazing @whoopigoldberg #CreepyYouGuysJustPointedOut #A3rdSetOfLegs 😂 #BriellesJacket