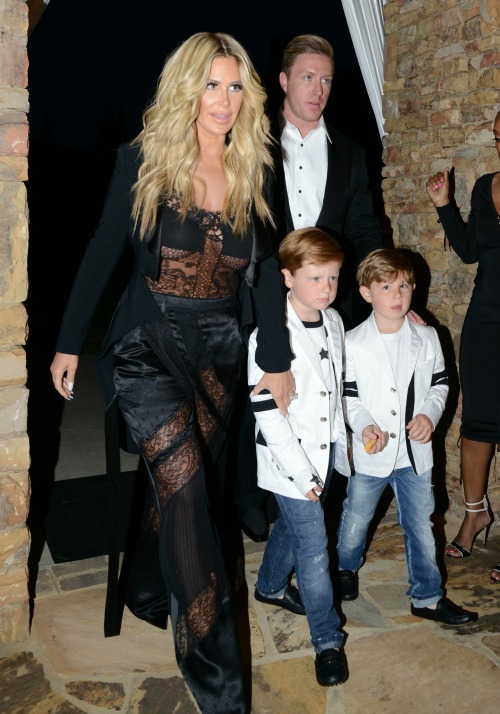 There’s no doubt that Kim Zolciak and Kroy Biermann are dependent on the linebacker’s NFL career. After several years with the Atlanta Falcons, Kroy Biermann’s transfer to the New York Buffalo Bills meant that he and Kim Zolciak were finally moving up and out of Atlanta and closer to New York City.

This was definitely great news for Kim Zolciak, who would have used her reality television ties to help boost her career in the big apple while Kroy Biermann had a better chance of winning a future Super Bowl with the highly-rated Buffalo Bills. But now that Kroy Biermann has been cut just four weeks after joining the team, the couple is in grave danger of losing everything they have – one thing for certain, their net work is going down.

For the last several weeks Kim Zolciak boasted about Kroy Biermann’s move to the Buffalo Bills and even showed off a $100,000 diamond ring he gave her after he signed his new contract. With six children and Kim Zolciak’s lavish spending sprees and no paycheck, there’s no doubt that Kroy Biermann is going through a lot of regrets as both he and his reality television wife are now forced to make some major cut backs.

With no contract and no stable job, Kim Zolciak and Kroy Biermann won’t be able to afford their luxurious lifestyle, much less support their six children. And knowing how addicted Kim Zolciak is to her image along with her much-rumored plastic surgery procedures, the former ‘Real Housewives of Atlanta’ star is going to have a hard time dealing with the reality of having an unemployed husband.

Should Kim Zolciak consider selling the $100,000 diamond ring Kroy Biermann bought her just to help her family stay afloat with their household bills? Surely, they are going to need more than just that.

What do you think, CDL readers? Does Kim Zolciak and Kroy Biermann’s marriage have a chance of surviving with their net worth falling now that he is unemployed and possibly broke? Drop us a line in our comments section below.

While your taking time out of your day to write nasty comments on my page, Im building a company, I’m sending nudes to my hubby, snuggling with my little ones, shopping online, filming my own tv show (5 yrs and still going strong) having lunch with my daughters, and planning my next vaca! WE ALL HAVE THE SAME 24HRS #KashmereKollections #6Kids #TVShow #SkincareLine #AwesomeHubby #HealthHappiness and fuckin #Peace …TRY IT 😉