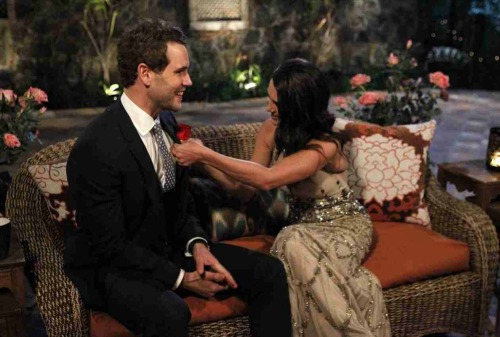 Just like Nick Viall, Andi Dorfman is definitely one who likes to kiss and tell. Nick Viall humiliated Andi Dorfman by revealing that the pair slept together before Josh Murray proposed to the former ‘Bachelorette’ during the season finale back in May of 2014.

Andi Dorfman got her revenge in return by revealing that Nick Viall didn’t perform to her expectations in the Fantasy Suite. According to Us Weekly, she called their moment of intimacy together, “a ladyboner-killing, awkward sexual encounter.” If that weren’t enough, Andi Dorfman also says that Nick Viall interrupted their sex to ask her, “Would you rather make love… or f—.”

Despite bashing his abilities between the sheets, Andi Dorfman seemed to change her tune after finding out that Nick Viall was chosen as the Bachelor for the long-running show’s season 21. Even though Nick Viall has proven to be a rather controversial pick, especially since he was long known as the least popular villain of of the series, Andi Dorfman sounded rather optimistic about his moment in the spotlight.

In a statement to Us Weekly, Andi Dorfman said, “I’m happy for Nick. It’s been a long road for him, but he has always been genuine about wanting to find love. So I’m happy to see him get another shot at it, and I wish him all the best.”

Surely, Andi Dorfman is regretting some of the decisions she made during her ‘Bachelorette’ stint. Andi Dorfman and Josh Murray’s engagement fizzled out after just six months. Josh Murray managed to move on and find love again with current girlfriend Amanda Stanton while Nick Viall was given several different opportunities by appearing four times on the series to find his one and only.

Yet for Andi Dorfman, the Atlanta, Georgia native has not only faded away into reality television obscurity, but she hasn’t had much luck in the dating pool, either. Despite her several attempts to get back on the small screen, she’s only had a list of failed projects behind her and a tell-all book, “It’s Not Okay: Turning Heartbreak Into Happily Never After” has only killed her chances of ever getting back on television even more.

Andi Dorfman’s decision to slam Nick Viall and then praise him for his new ‘Bachelor’ season clearly makes her look like a hypocrite and an opportunist.

What do you think, CDL readers? Is Andi Dorfman regretting her vile remarks about her Nick Viall sex? Let us know what you think in our comments section and make sure to return to CDL often to enjoy all your The Bachelor news, views and spoilers!

A message from THE BACHELOR!! #TheBachelor @nickviall