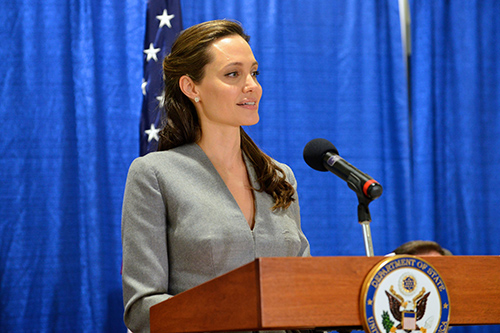 The Angelina Jolie and Amal Alamuddin feud has taken a strange new twist. There’s speculation that reports of Angelina Jolie teaching at Georgetown University might have allegedly been planted in the press by the Hollywood actress herself, as Amal Alamuddin has swiped away her title as the celebrity world’s most glamorous humanitarian.

Angelina Jolie and Amal Alamuddin’s feud began when the Hollywood actress and her husband Brad Pitt refused to attend 2014’s wedding of the year, which of course belonged to Amal Alamuddin and George Clooney. Even though Brad Pitt and George Clooney’s friendship has stood the test of time, their wives have driven them apart and now it looks like Angelina Jolie’s jealousy is definitely going to drive an ever deeper wedge between them.

Angelina Jolie’s title as a U.S. Special Envoy isn’t getting as much attention as Amal Alamuddin and her work in the International courtroom, and that might be why the actress’ team of handlers could possibly have planted the rumors that she was supposed to teach a class at Georgetown University this Fall.

Yet, according to Vanity Fair, the rumors have been debunked with a representative for the school saying, “There are no current plans for Ms. Jolie to teach at Georgetown, but Angelina Jolie and William Hague have an open invitation to share their experiences and perspectives at Georgetown anytime they’re able.”

Clearly, this is a direct insult to Angelina Jolie, as it once again proves that she can’t compare to Amal Alamuddin and her long list of accomplishments and qualifications. Back in 2015, the British-born lawyer managed to teach a semester of International Human Rights Law at Columbia University.

Of course, with her expertise in the field, it’s no wonder that Amal Alamuddin was asked to do the job. For Angelina Jolie, though, she doesn’t have the education or background to carry a class the same way George Clooney’s wife would. But of course, Angelina Jolie sees things differently: whatever Amal Alamuddin can do, of course she can do it better.

Angelina Jolie and Brad Pitt used to be Hollywood’s golden couple but their reign has faded, as it now belongs to George Clooney and Amal Alamuddin. And apparently that’s why Angelina Jolie’s supposedly willing to do anything to steal the spotlight from underneath Amal Alamuddin, even if that means planting rumors for the press to feed on.

Tell us CDL readers, do you think Angelina Jolie is jealous of Amal Alamuddin? Let us know in the comments section below.