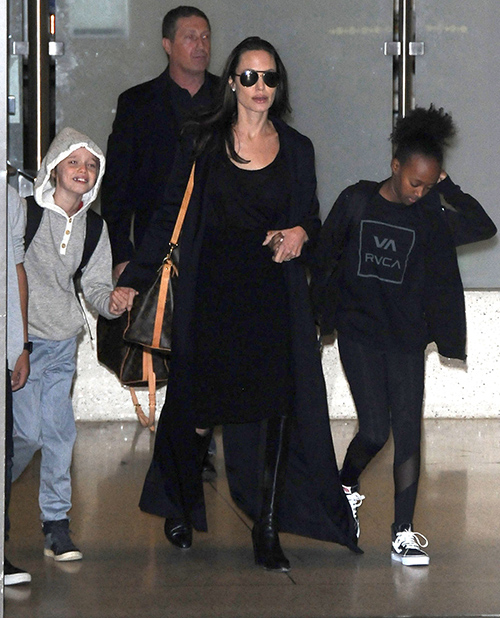 Is Angelina cheating on Brad? Angelina Jolie and Brad Pitt divorce talk has been floating around for months now. It’s no secret that Hollywood’s first couple has some major issues. Between Brad and Angie’s wandering eyes and raging jealousy – it really is a miracle that they have made it this far.

Brangelina recently worked together on a film called “By The Sea.” Since every time they work separately, one of them has an alleged affair on set, it seemed to make sense that they work together. But, it turns out working together is actually worse for their relationship than working separately, and “By The Sea” actually hurt their marriage more than it helped it. So, the couple is back to booking movies on their own.

Angelina Jolie is currently working on a new movie called “First They Killed My Father” in Cambodia. According to a new tabloid report, she is getting a little bit too close to one of the members of the film’s camera crew – who just happens to be a dead ringer for a much younger Brad Pitt. Well, she certainly has a type!

This week’s edition of National Enquirer reports that tongues are wagging on the set of the new movie, and everyone has noticed Angelina and the unnamed camera guy’s flirtations. An insider dished to National Enquirer, “They were having a very flirty, lighthearted talk about something. At one point, they both disappeared. Angie returned a little later with a big smile on her face.” The source goes to say that Angelina has a “school girl crush” on the crew member, and they can’t seem to leave each other alone.

At this point, nothing surprises when it comes to Brad and Angelina – regardless of who cheats or how many times, it is easier to just stay in their sham of a marriage than file for divorce and try to divide up their children and multi million dollar fortune. What do you guys think? Is Angie cheating on Brad? Or does the couple just have an open marriage at this point? Let us know what you think in the comments below!