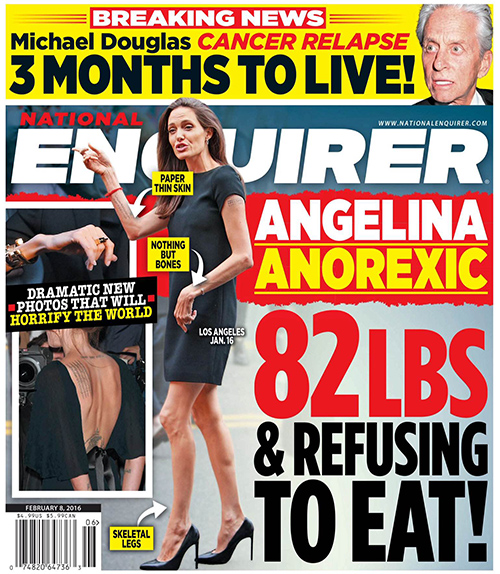 Is Angelina Jolie’s frightening and dramatic weight loss an anorexia crisis? Is Brad Pitt frustrated and threatening divorce because Angie refuses to eat? If you have seen photos of Angie over the past few months, then you might be aware that the actress’s bones are sticking out and she appears unhealthily skinny. Sources close to Brad and Angie told the National Enquirer that Jolie weight has plummeted to a life-threatening 82 pounds.

A doctor who has not treated Angelina was contacted by NE for his medical opinion. This doctor from a clinic in Scottsdale, Arizona examined photographs of Jolie and concluded he would “immediately admit a person in [Angie’s] condition to an inpatient behavioral treatment center.”

This doctor believes Angelina Jolie, or any other patient who looks this thin, needs the medical assistance of psychiatrists, cardiologists, nutritionists and supportive family members.

Is Angelina truly anorexic or does the actress just forget to slow down and eat properly? Despite undergoing two major surgeries in two years – a double mastectomy and removal of her fallopian tubes and ovaries – Angelina only took a short break before returning to acting and producing. The mother-of-six always seems to be always on the go.

Insiders reveal that there are times Angie will go an entire day and not eat any solid foods. There are days when Angie is so exhausted the actress will sleep nearly the entire day. An emergency intervention seems to be necessary before Angie puts her health further in jeopardy.

Of course, Brad Pitt has reason to worry if Angelina Jolie’s health is at risk. Those close to the couple divulged that Brad has met with therapists, dietitians, and an assortment of other medical experts in an effort to make Angelina see that she is slowly killing herself by refusing to eat.

If Brad Pitt can’t get through to Angelina, then who can? Is it time for friends and family members to come together and force the award-winning actress to get the medical and psychiatric help it appears she desperately needs?