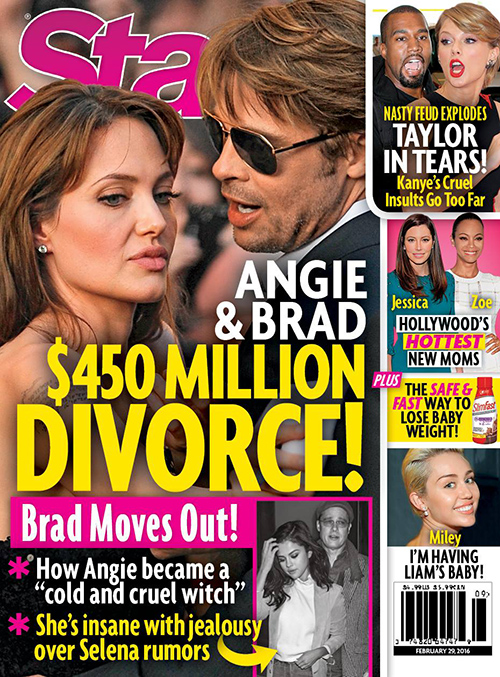 Did Selena Gomez cause Brad Pitt and Angelina Jolie to break up? It’s no secret that there has been trouble in paradise for months, and Hollywood’s favorite couple Brad and Angie’s marriage has been shaky – to say the least. Angelina Jolie has always had jealousy issues and insecurities – and it seems like every other month she is reportedly accusing Brad of cheating … but with Selena Gomez?

The cover of this week’s Star Magazine features a photo of Brad Pitt and Angelina Jolie – the headline screams: “Angie & Brad $450 Million Divorce!” The tabloid’s cover goes onto say that Brad has reportedly moved out of the family’s mansion and left his wife and kids, and “Angie became a cold and cruel witch.” Jolie has reportedly already contacted divorce attorneys, according to Star’s inside sources.

So, what does Selena Gomez have to do with the couple’s reported demise? SelGo and Brad Pitt were spotted chatting each other up at the Golden Globe Awards, and Angelina hasn’t been able to let it go. In Angie’s defense, Selena doesn’t have the greatest reputation in Hollywood when it comes to guys. And, it’s no secret she likes older men. Selena did have an on-again, off-again thing with Orlando Bloom.

We’re really not seeing a Selena and Brad hook-up happening, but stranger things have definitely happened in Hollywood. Besides, Selena is BFFs with Jennifer Aniston – would she really try to sink her claws into Jen’s ex-husband? Regardless of how innocent Selena and Brad’s friendship is, Angelina Jolie’s insecurities have gotten the best of her once again. Star Magazine teases, “She’s insane with jealousy over Selena rumors.”

What do you guys think? Have Angelina and Brad finally pulled the plug on their troubled marriage? Is Selena Gomez really to blame – do you think she would ever actually hook up with Pitt? Let us know what you think in the comments below!