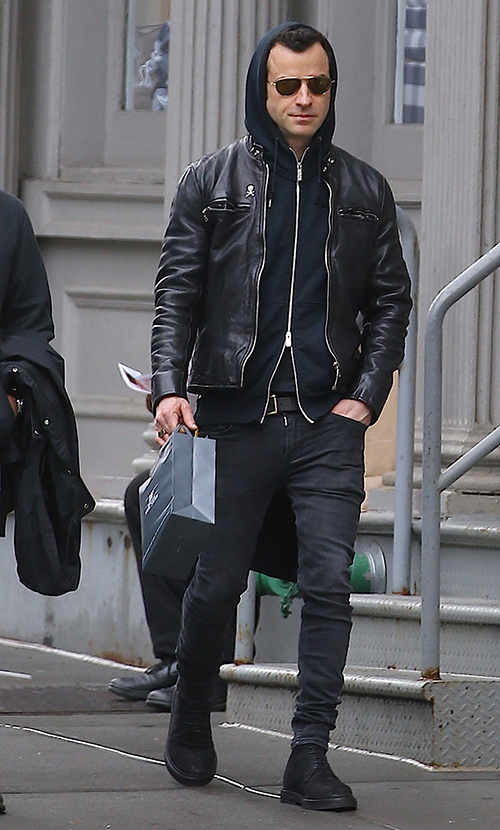 The inside source reports, “Brad’s made a major pitch to Justin, dangling big money – plus a possible Oscar nomination – in his face! Justin’s thrilled, really wants to work with Brad – and couldn’t wait to tell Jen his ‘exciting news!’ But Jen hit the roof! Now that she’s out of her ex’s bed, she’s horrified at the though of New Hubby cozily creeping back in with Old Lover! Jen’s stunned that Brad’s created this nightmare – and she’s furious with star-struck Justin!”

Well, um. Yeah. Who wants to have their ex-husband turn into besties with the current husband? No one. That’s who. Justin Theroux working alongside Brad Pitt would be a tough pill to swallow in Jennifer Aniston’s shoes. I don’t think I could do it.

Would you give your guy an ultimatum if you were facing this situation? Or would you be all supportive no matter how much it bothered or hurt you? If Justin Theroux is going to team up with Brad Pitt in a movie, maybe Jen can up her workload to distract her from it? I haven’t seen Jennifer Aniston in a movie since Horrible Bosses 2.

What does Jennifer have lined up for 2016? She is currently filming a war drama called Yellow Birds. Also on tap will be her Mother’s Day comedy that is in post-production. Then, finally, she is getting ready to start filming Mean Moms, a comedy drama that will hopefully be the adult version of Lindsay Lohan’s Mean Girls. We can hope, right?

Share your thoughts in the comments below…do you think that Justin Theroux would really do a movie with Brad Pitt? Check back to CDL for all the latest updates!