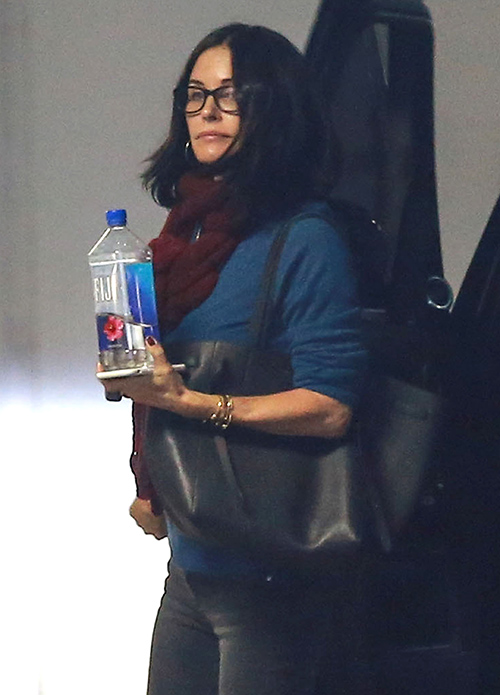 Jennifer Aniston and Justin Theroux have turned their back on Courteney Cox in the wake of her breakup with Johnny McDaid. It’s pretty clear that Jen and Justin are taking McDaid’s side after the Snow Patrol singer dumped Cox at the beginning of December. Courteney and Jennifer have been friends for years and the reason for Jennifer’s betrayal is pretty shocking.

Courteney Cox is in a bad place after losing her fiance and her best friend this month. The National Enquirer reports that Courteney was stunned after trying to lean on Jennifer Aniston’s shoulder after a painful breaking with Johnny McDaid. Cox certainly didn’t expect Aniston to turn on her and side with her ex-fiance.

That’s exactly what happened though when Courteney tried to pour her heart out to her BFF. Both Jennifer and her new hubby Justin Theroux turned their backs because they think Courteney deserved to be dumped. Of course, Courteney is devastated after losing so many friendships all at once. “Courteney is beside herself and can’t believe Jen would betray her in such a humiliating fashion,” claims a National Enquirer insider.

Courteney accused Jennifer of betraying their friendship. Of course, Cox expected Jennifer Aniston to automatically side with her considering how long they have been friends. Aniston seemed to think differently though because it’s sounding like she would rather be friends with Johnny McDaid.

Cox must have thought her friend would be more sympathetic but, according to the insider, “Jen turned around and accused Courteney of acting like a high school brat. She said it wasn’t Johnny’s fault the relationship had disintegrated, and that she felt insulted that Courteney would try to dictate to her and Justin.” The newlywed actors reportedly both feel that Courteney deserved to be dumped and that she didn’t treat Johnny very well.

There were rumblings that Courteney refused to move away from Los Angeles and Johnny wanted to move back home to the UK. That lines up with claims that Courteney is obsessed with being famous and staying among the celebrity life. Courteney completely ignored McDaid’s wants and needs during their failed relationship. That’s why Aniston and Theroux feel like Cox brought this breakup on herself.