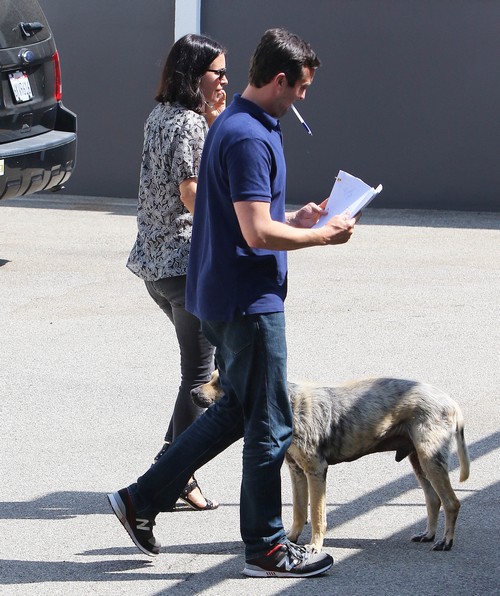 Johnny McDaid has finally surfaced after a very public breakup with Courteney Cox. The Snow Patrol frontman was all smiles in Dublin with his band where they were honored with the Gold Medal of Honorary Patronage from Trinity College’s Philosophical Society.

The Snow Patrol singer looked pretty happy post split. McDaid wasn’t looking upset about his recent breakup with the Friends star at all. News of Courteney and Johnny’s split went public at the beginning of December and the Snow Patrol singer hasn’t been seen in public since. Fans thought the musician may have been recovering from heartbreak but that doesn’t look like the case at all.

Reports about why Courteney and Johnny broke up are conflicting. TMZ reported that the split was mutual after Courteney refused to leave Los Angeles to be with her man. Apparently McDaid wants to move back to the United Kingdom and get away from the fast life in LA. That didn’t work for Cox who opted not to be in the relationship instead.

There were also rumblings about a possible cheating scenario. Cox was said to have hired a private investigator prior to dumping Johnny McDaid. Details involving the investigator are scarce but the timing between the P.I. and the breakup made it look like something scandalous was going on and Courteney found out about it.

Courteney Cox and Johnny McDaid got engaged in June 2014 after just six months of dating. It seems they must not have been too inseparable if Courteney and Johnny really broke up because they couldn’t agree on where to live.

The way Cox and McDaid are avoiding each other post breakup, it seems like something more serious happened. The Friends star and her rocker ex-fiance aren’t acting like things ended well at all.

Since splitting with Johnny McDaid, Courteney Cox has been romantically linked to her former Friends love interest Matthew Perry as well as a real-life ex-lover Michael Keaton. Despite fans of the classic NBC hit cheering about a possible Perry romance, Cox is denying involvement with both actors.