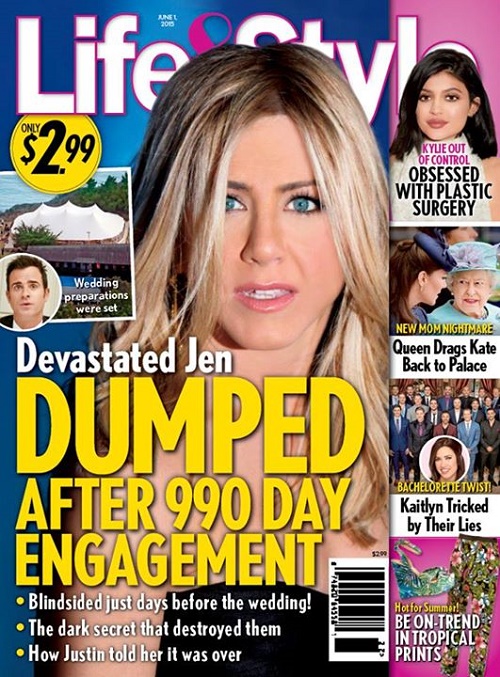 According to a new report, Jennifer Aniston has been dumped by her longtime fiance, Justin Theroux, after 990 days of being engaged. Apparently, it only took Justin A REALLY LONG TIME to discover that Jen, well, wasn’t his dream girl after all. The Jennifer Aniston/Justin Theorux wedding has been the talk of the town for what seems like decades. Maybe, after all the thousands of the headlines that have been published speculating the nature of her glorious white wedding, the gossip can be put to rest. Have Jennifer Aniston and Justin Theroux really split for good?

Justin Theroux could have begun to lose his feelings for Jen a long time ago. Perhaps, deep down, he was beginning to feel like her chaperone more than anything else. It’s clear that Jennifer possessed the fame and power in the relationship, and maybe Justin finally grew tired of skulking about in her Red Carpet shadow – that’s if he decided to accompany her, of course.

Jen is now inundated with stories dirtying her reputation and it appears as if Justin’s not doing a thing to rectify the situations. Doesn’t this prove that Justin loves seeing Jen’s love life spiral out of control? If Justin does not step up to the plate now and stand by his rumored bride, then why would Jennifer want to marry him in the first place?

Ironically, Jen has been the sole leader in planning the alleged wedding. With that in mind, the stories of her wedding plans have always had the mystique akin to a “shotgun wedding” without any pregnancy.

What do you make of this volatile news, which never seems to die down or offer any concrete details. Is it all just gossip and fluffy-fluff? Or is there really a rift forming between Jennifer and Justin – and has it led them down the dark path toward Splitsville?