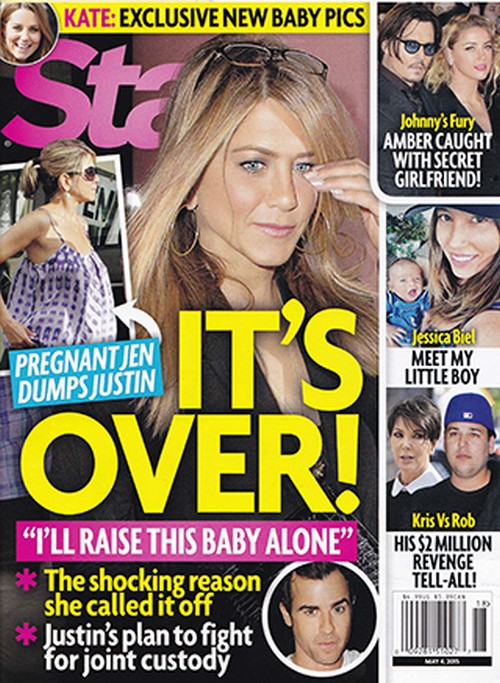 At least once a month, Star Magazine [or some other tabloid] reports that Jennifer Aniston is pregnant. In fact, that should almost be their recurring motif, especially since they use different variations of the same story, over and over and over again.

This time around, the latest cover issue from Star Magazine alleges that a pregnant Jennifer Aniston has dumped Justin Theroux. But wait, there’s a twist. This time, Justin Theroux apparently plans to fight for joint custody.

Apparently, Jennifer Aniston was having dinner with Courteney Cox at the Sunset Tower in Hollywood on April 8th, when Jennifer supposedly had a breakdown in front of the whole restaurant. And since this is a tabloid, of course they have an eyewitness who supposedly saw the whole breakdown, with this person claiming, “Jennifer said [Justin Theroux] wasn’t trying hard enough to save the relationship, and she was so tired of always fighting with him. [And even though she’s pregnant], she’s going to keep the baby whether she’s with Justin or not!”

And if that’s not enough, Justin Theroux apparently plans to fight tooth and nail for custody. Don’t ask me how this eyewitness is supposed to know that bit, we’re just going with it.

Plus, Amber Heard and Johnny Depp are reportedly fighting [shocker] over Amber’s secret girlfriend. Seriously, who wants to make a bet that those two will end up getting a divorce before the end of the year?

Finally, Kris Jenner is reportedly planning a $2 million revenge tell-all after Rob Kardashian blamed her for all of his health issues. Seriously, there are no words for how dysfunctional the Kardashians are…

What do you guys think about Jennifer Aniston supposedly being pregnant, and then dumping Justin Theroux? And do you think he actually would fight for joint custody in such a scenario? Let us know your thoughts in the comments below.