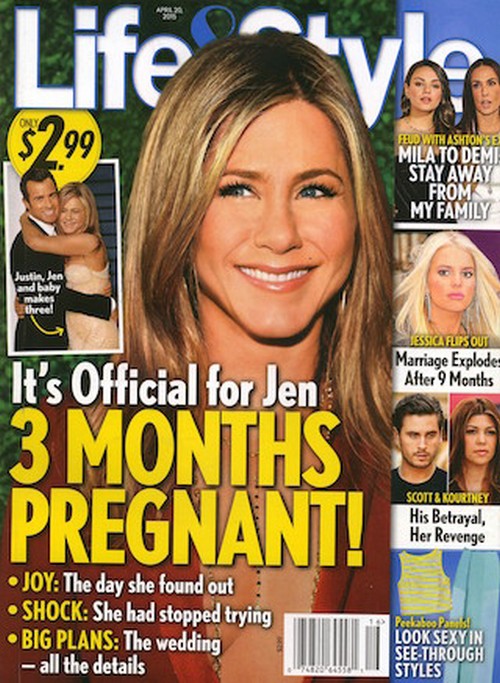 Jennifer Aniston might hate the tabloids for making up lies about her marriage and pregnancy, but they’re not stopping or even slowing down in that regard. In fact, the latest cover issue of Life & Style Magazine claims that Jennifer is actually three months pregnant with Justin Theroux’s child.

Life & Style’s ‘source’ further elaborates about Jennifer’s surprise pregnancy, explaining, “At first, Jen felt total disbelief and shock. But that feeling quickly turned into complete joy.” Apparently, Jennifer started getting signs of a possible pregnancy when she missed her period and she started ‘getting nauseated and feeling exhausted’.

Following the missed period, Justin reportedly went and got two pregnancy tests for Jennifer, both of which turned out positive.

What I want to know is, who is this ‘source’ that has such intimate knowledge of how Jennifer Aniston and Justin Theroux supposedly found out they were expecting? Unless it’s Jennifer or Justin themselves speaking to the magazine, how is this source supposed to know that Justin went and bought two pregnancy tests for Jennifer after she missed her period? It’s just an insane level of detail for a story that really just requires, ‘Jennifer found out she was pregnant. She and Justin are ecstatic. Period.’

What do you guys think? Is Jennifer Aniston really pregnant, or is this yet another lie concocted by the tabloids? If she was pregnant, I’m pretty sure that People Magazine or another, more legitimate source (like CDL) would be the first to know. But since we’re hearing it from Life & Style [for the millionth time], it’s a bit harder to take seriously. Plus, Jennifer hasn’t changed her skin-tight dress routine, and I guarantee, that’s the first thing that’ll look different when [and if] she becomes pregnant.

Let us know your thoughts on Jennifer Aniston’s possible pregnancy [or not pregnancy] in the comments below.