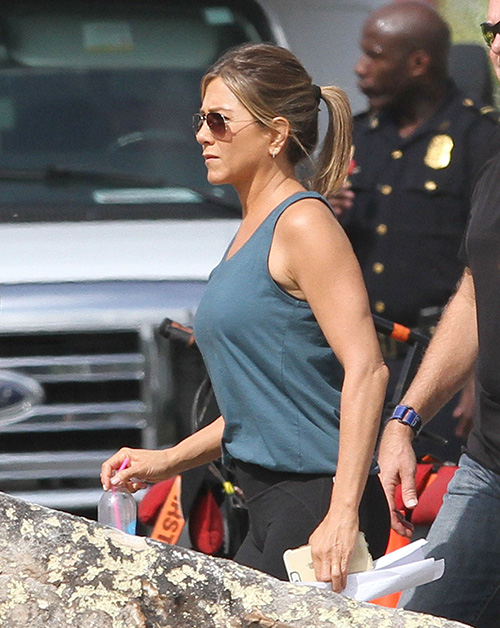 Is Justin Theruox cheating on Jennifer Aniston with his co-star Margaret Qualley? Someone might want to tell Justin that he is a married man now! Justin Theroux and Jennifer Aniston finally ended their three-year long engagement and got married this summer in a secret wedding in the backyard of their Bel-Air mansion. But, since they tied the knot, Justin hasn’t exactly been the picture-perfect husband – and according to a new report he has been flirting up a storm on “The Leftovers” set with co-star Margaret Qualley.

This week’s edition of In Touch Magazine reveals that Justin and Margaret’s relationship on the set of the HBO drama “The Leftovers” has raised a few eyebrows. Apparently, there was a network party recently, and the entire cast of “The Leftovers” attended – including Margaret and Justin. Eyewitnesses couldn’t help but notice Qualley “dancing and shimmying next to him” and Justin was reportedly “feeding into it” and couldn’t get enough of his 19-year-old co-star. The source added that “Justin was having a great time without Jen.”

Apparently, the honeymoon stage for Theroux and Aniston is over, although it never really began – just a few short days after their wedding Justin flew back to Texas to work on Season 2 of “The Leftovers.” Sources close to the couple tell In Touch Magazine that Jennifer Aniston is miserable with her marriage – and it is not turning out how she thought that it would at all. Jennifer Aniston reportedly asked Justin to have filming of the HBO drama moved to Cali so that they can be closer together, but it doesn’t look like that is going to happen.

At this rate, Justin Theroux and Jennifer Aniston’s marriage might turn out to be shorter than their engagement! Do you think that Justin would cheat on Jen with Margaret Qualley? Is there a divorce in their near future? Let us know what you think in the comments below!