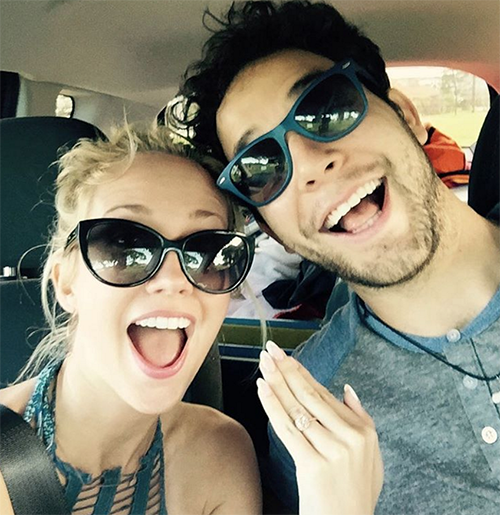 Anna Camp and Skylar Astin shared the big screen, twice, in the Pitch Perfect films that gave us all a lot of laughs. Now the real life couple are ready to take the plunge into wedded bliss together as they announced their engagement via Instagram, “I asked. She said yes!!!” Short and sweet. Love it.

In case you missed it, this adorable couple has been together since back in 2013. That is of course the same year that Anna Camp was divorced from her now ex-husband, Scrubs star Michael Mosley. They were engaged back in 2008, married in 2010, then split and signed divorce papers in April of 2013. It was just two months later in June when Skylar Astin and Anna Camp made their first appearance as a couple at the 3rd Annual 24 Hour Plays in Santa Monica, California.

We love the bling, Skylar. Very classy taste! Congratulations to the very happy couple! Hurry up and set a date! Spring is around the corner and who doesn’t love a June wedding? So what’s next? Pitch Perfect 3 or a wedding? Chances are, the new film will hit the big screen before the nuptials are recited. Or would they possibly just sneak off to their vacation spot in Hawaii and have a private wedding outside of the spotlight?

Seeing as it’s Anna’s second wedding, maybe she won’t care about all the foo-foo stuff? I could definitely see her as a gorgeous barefoot bride on a white, sandy beach. Perfectly intimate.

On another note, when Pitch Perfect 3 does hit the big screen, I am personally hoping for more of the same laughs I had with the first edition. The second one left me a little dry. But then again, how often do they hit home runs in the second attempt?

Kay Cannon, who wrote the first two, is writing the third as well. Hunger Games star, Elizabeth Banks, will be producing once again. And of course, our favorites, Rebel Wilson, Anna Kendrick, and Brittany Snow will be back in the line up.

Are you ready for a third installment? Were you satisfied with the second? I am crossing fingers and toes that Pitch Perfect 3 will “be the charm.”