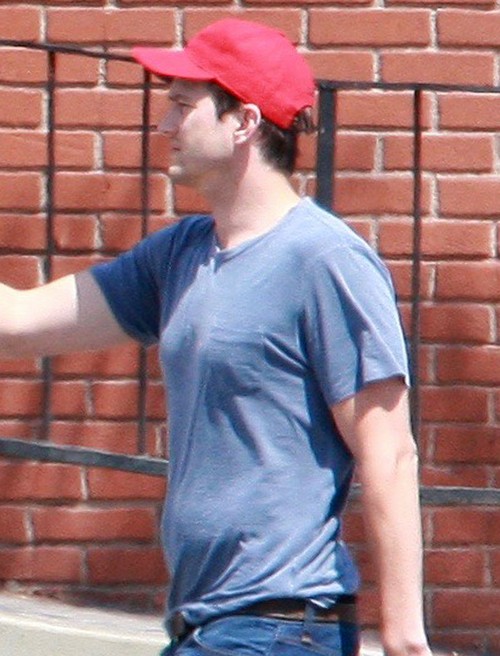 Ashton Kutcher is putting on sympathy weight during his wife Mila Kunis’ pregnancy. The Hollywood actor was spotted displaying his middle-aged dad bod while he was out and about running errands in Studio City, California over the weekend.

Ashton Kutcher and Mila Kunis married back in 2015 and are currently expecting their second child together. The couple’s second baby will be joining 21-month-old sister Wyatt later this year. The low-key couple, who have managed to keep their family life out of the public spotlight, are often seen wearing gym clothes as part of their low-key lifestyle whenever they are spotted around the Los Angeles area.

And while Mila Kunis is midway through her second pregnancy, it seems as though Ashton Kutcher’s pregnancy weight might be getting the best of him as well. The ‘Two and a Half Men’ star appeared to be sporting a large belly under his t-shirt during his outing.

The former Calvin Klein model was oblivious to the nearby paparazzi who snapped the actor in his figure-hugging but unflattering ensemble of an old t-shirt and jeans, which he has been seen wearing throughout Mila Kunis’ pregnancy.

Clearly Ashton Kutcher and Mila Kunis have settled into their marriage and family life with ease so much so that the actor is gaining weight along with his wife. This isn’t uncommon as many spouses typically gain a few “sympathy pounds” during their wife’s pregnancy, as is the case here with Ashton Kutcher.

Ashton Kutcher’s Hollywood status as a heartthrob is definitely at stake here as his ‘dad bod’ signals a shift in the actor’s lifestyle. Rather than hitting the gym and working on his physique, Ashton Kutcher apparently prefers to stay at home and enjoy Mila Kunis’ pregnancy by her side.

With their combined net worth of $170 million dollars, Ashton Kutcher and Mila Kunis have made it clear that chasing the celebrity spotlight is the last thing on their mind as they would rather stay at home and raise their children than attend red carpet events or wear clean clothes for that matter, too.

Tell us CDL readers, do you think Ashton Kuthcer has a ‘dad bod’ now? Or is Ashton Kutcher just badly out of shape? Take a look at our photo gallery below and of course let us know your thoughts in our comments section.

Ashton Kutcher is spotted out and about in Studio City, California on August 22, 2016. Ashton, who is currently expecting his second child with Mila Kunis, was sporting a large belly under his t-shirt during the outing. FameFlynet