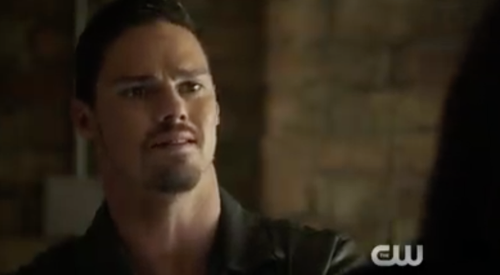 Tonight on the CW their hit fantasy drama BEAUTY AND THE BEAST airs with an all new Thursday, July 7 season 4 episode 6 called, “Beast of Times, Worst of Times,” and we have your weekly Beauty and the Beast recap below. On tonight’s episode, Vincent (Jay Ryan) and Cat (Kristin Kreuk) learn that another nemesis is out to get Vincent.

On the last episode, when Vincent and Cat were forced into hiding due to his being someone’s target, he wondered what life would have been like for her without him in it. Did you watch the last episode? If you missed it, we have a full and detailed Beauty and the Beast recap right here for you.

On tonight’s episode per the CW synopsis “Vincent and Cat learn that another nemesis is out to get Vincent; and their relationship is endangered when they wind up on opposite sides of the law.”

They were told to stay under the radar until Deputy Secretary Hill found a lead on whoever wanted them dead however living together and trying to act as normal as possible was testing everyone’s patience on tonight’s episode of “Beauty & the Beast”.

As it happens it wasn’t a good idea for them that they all moved into JT’s place. What with the limited rooming and the fact that JT and Tess were no longer together. Yet, they were all trying to do their best to just ride it out when suddenly a news reporter began focusing on beasts. Channel 10’s Grace Rose was apparently very interested in making a name for herself she had begun to question whether or not the bloggers were right and DHS did cover up a secret military program. So naturally that worried everyone at the loft and Cat simply knew that her boss wasn’t going to like it either.

But Hill had some very upsetting news for Cat and Vincent when he later saw them. He said that his boss had called into his office to ask him about what was happening and if he was covering something up. So he said that he wasn’t going to be much help with internal affairs watching him all the time though Hill did also say that he did find a lead for them. He said that one of the snipers that tried to kill them recently was proven to have ties with Colonel Fuller. Fuller had been Vincent’s Commanding Officer in Afghanistan and he had also tried to kill everyone attached to super soldier program once orders came in.

So Fuller was a man that Vincent once respected and revered before Fuller ended up turning against their entire unit and attempted to kill them all. Though in spite of how their relationship ended, Vincent had questioned Hill about his intel. He said that Fuller had plenty of chance to come after him and that it had been a pretty long time since Afghanistan yet Hill appeared to be very sure about what he found out. He said that the sniper he found had also been in Fuller’s unit and that Fuller would have a motive for wanting to get rid of anyone that could lead him to the beast program.

Fuller had unfortunately, rose through the ranks following what happened to Vincent and his unit. So it was expected that he would be receiving his first star any day now. However, to prove that Fuller really did try to kill Vincent and everyone that know about the program, Hill said that they needed access to a military super computer that was on Fuller’s base which was unfortunately, something Hill couldn’t be spotted checking into. Hill said that it would raise too many red flags if he sent an agent in much less with a device that could scan everything so Cat told him not to worry. She said that she and Vincent could handle it as long as Hill came through on the device.

And Hill did come through. He gave Vincent and Cat the device they needed to scan the super computer however they had to work out had to get on the base with just JT’s help. Cat had asked JT if he broke into the military’s security mainframe and by pure chance, he was able to get Vincent inside with the alias of Captain Chandler. But then several odd incidents began to occur all at once. First, JT was offered a job at a well-known biotech firm and the fact his interview was that afternoon seemed out of the blue though as it turns out he wasn’t the only one that was suddenly cut off guard in the  middle of a dangerous mission.

Cat had also had gotten held up when DHS internal affairs arrived at her office and began demanding answers. According to them, they said that they knew everything because Deputy Secretary Hill had already talked to them about her husband. Though what they thought they knew didn’t quite match with what Cat knew. Internal Affairs said that Hill told them about the secret investigation into her husband. A mentally unstable war vet that appeared to have gone off the hinges after Agent Russo’s murder. So Hill had made it out to look as if Vincent was dangerous and could be on the brink of performing a potential terrorist attack.

So that made Cat think about the device Hill had given them. Cat had given that device that to Vincent because she thought Hill was helping him, but if he wasn’t then why would he give them something that he knew for a fact they would use on a military computer. Yet, just as Cat was finally figuring something was wrong, it was too late for either Vincent or Fuller. Vincent had come across Fuller on the military base and had pressured the other man into giving him access to the super computer so they were together when Vincent used Hill’s device.

However, just before an explosion went off, Fuller and Vincent had talked. Vincent had accused his former CO of trying to kill him and Fuller said nothing could be farther from the truth. Fuller had apparently tried to protect Vincent back in Afghanistan and it was because of him that Vincent was able to escape when some many hadn’t. So it wasn’t until the explosion went off that Vincent realized he played a part in an innocent man’s death because Fuller could not have been the one that tried to kill them at that café.

Fuller wouldn’t have gone to such trouble to save Vincent’s life to suddenly change his mind because of a star. Hill on the other hand, had been the one to fabricate a story about Fuller and he also was the one that provided Vincent a bomb that could have killed him. So it seems the only person that has been trying to kill Vincent this entire time and doing his best to hide the part where DHS played in the covering up beasts was Hill. But fortunately, Hill was wrong about what Vincent could withstand because he didn’t die in the blast and later he wasn’t the one that was scared when Hill illegally took him took to him an abandoned warehouse.

Hill’s plan had been to frame Vincent for the terrorist attack so Cat had still been with internal affairs when her husband was found alive yet taken to an offsite by Hill for questioning. By then, Cat knew that Hill was going to try and kill her husband so she ditched the guards that were watching her and tracked down Vincent with JT’s help. JT’s job offer had somehow turned into a flirting session with a young woman from the company that claimed they were hiring him. So Tess dragged him out of there once she began to feel like the young woman was a honeypot.

Which, in other words, means a distraction that was to keep JT’s eyes from somewhere else and he had actually forgotten about Vincent’s mission while he was speaking with a beautiful young woman. Though Tess was able to wrangle JT back to their reality. So he helped Cat track down Vincent and together they tried to do their best to stop either Hill killing Vincent or Vincent killing Hill although as it turns out no one could actually stop Vincent from killing Hill because Hill had again underestimate Vincent. And that cost his life after he tried to trigger a beast attack by injecting Vincent with a shot of Synthesized adrenaline.

It was that shot that pushed Vincent’s into an uncontrollable rage and now Vincent is public enemy number because of Hill’s murder. But even as the odds look against them and there was still a new crew buzzing around, Cat managed to sneak out to see him after he had come down from that shot and she told them that they would find a way. She didn’t say how or that the death of a DHS was always going to hang over their head, she just said they would find a way to fix it and get their happy ending back.