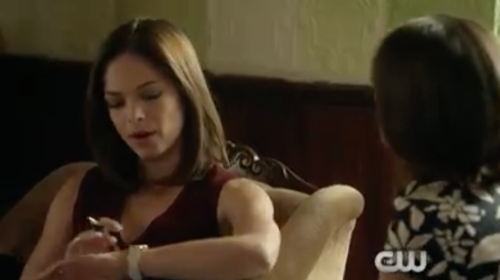 Tonight on the CW their hit fantasy drama BEAUTY AND THE BEAST airs with an all new Thursday, June 30 season 4 episode 5 called, “It’s a Wonderful Beast,” and we have your weekly Beauty and The Beast recap below. On tonight’s episode when Vincent (Jay Ryan) and Cat (Kristin Kreuk) are forced into hiding due to his being someone’s target.

On the last episode, Cat investigated who was after Vincent and suspected that she may have been pregnant. Did you watch the last episode? If you missed it, we have a full and detailed Beauty and the Beast recap right here for you.

On tonight’s episode per the CW synopsis “when Vincent and Cat are forced into hiding due to his being someone’s target, he wonders what life would have been like for her without him in it—and gets a glimpse of just that.”

Doctors make the worst patients and Vincent proved it on tonight’s episode of “Beauty & The Beast”.

Vincent had gotten injured on last week’s episode when a bounty hunter ended up shooting him in the side. So he was still recovering and unfortunately he was turning out to be the worst sort of patient. Vincent was grouchy and the drugs he was on for the injury was making a little delusional. Vincent and Cat had been in bed one night when they heard an intruder in the apartment. Yet, the intruder was later shown to be a part of a team.

Vincent and Cat had knocked their intruder out and they had actually tried to get information out of him, but Vincent had lost some of his cool and knocked the guy again. So Cat wanted to be angry with him because of that and they would have ended up in an argument if they hadn’t seen one of their phones. Someone had apparently hacked their phones to send out a message to their friends and they would only have done that if they wanted to erase everything connected to Vincent. And not just Vincent himself.

The trap though was a little complicated. The text messages sent to Tess and JT lured them to their favorite coffee spot and there a two snipers did their best to take the two out. However, Cat and Vincent showed up and they evened out the playing field. Vincent tackle the guys head on while Cat went into the building to protect Tess and JT. And so they were all doing their best to merely survive the night when Vincent went down for the count. Vincent had reopened his wound and the pain it caused was bringing about a fugue state.

The fugue state was where Vincent lost all control. He didn’t know where he was or recognize friends when he saw them so that fugue state had made Vincent incredibly dangerous to be around, but JT had an idea on how to handle it. He said that Vincent needed meds so he had the girls provide him cover until he was able to fetch supplies from Vincent’s stash back at the apartment. And when JT came back, he then had to rush Vincent’s treatment because they couldn’t have Vincent in beast mode as they heard the cops coming.

But Vincent hadn’t been in any old fugue state, he had actually thought he was in an alternate world. Vincent who was going back and forth between what was real and what hadn’t made sense was experiencing what it would be like if he hadn’t gotten involved in Cat’s life. Vincent changed the key moment where he exposed himself to Cat and that seemed to have changed everything. He and JT were still dealing with Muirfield while Cat was oddly enough married to a very much alive Evan.

And yet all wasn’t peachy keen in that made-up world. There, Vincent’s fugue states were getting more out of control because he had never learned how to handle them properly and Cat’s marriage to Evan was falling apart. So the many times that Vincent thought Cat’s life would be easier without him turned out to be wishful thinking on his part because she wasn’t happy. While Cat was no longer hiding things from people or living a double life because of her association with Vincent, it was a constant strain on her marriage as well as on her friendships that no one believed her when she said animal like creature saved after her mother was murdered.

So without Vincent there to prove to her that she wasn’t crazy, Cat would have always wondered if she had imagined him. And frankly that would have tainted everything. Most especially what she could have had with Evan. Evan was still a nice guy and he did love her however he still began working with Muirfield as some misguided attempt to save Catherine from what thought was a threat. The threat being Vincent.

Yet, when Vincent woke up in that world and realized that something was off, he immediately tried contacting Cat. He followed her to their coffee spot and tried to tell her that they were married and happy though she didn’t believe him. Instead she just thought he was crazy so the only way Vincent could convince her that he was telling the truth was to mention her mother. He got as far as telling her that her mother’s death wasn’t her fault when she finally knocked him before making a run for it.

Only what he said did make her question who he was. So she was asking Tess for advice about what she should do and that’s when Evan overheard her. Evan overheard her mention a man that possibly could have been the one that saved her and he called Muirfield. Who then kidnapped Cat as a way to lure Vincent out of hiding so Evan’s plan, no matter what timeline, always fails. Though Vincent was able to fix his mistake by rescuing Cat and the two of them were in the middle making a run for their lives when the dream world finally if not abruptly collapsed.

Vincent suddenly went from believing that he had to protect Cat from Muirfield to be back at the coffee shop with a worried JT, Cat, and Tess. The snipers had apparently given up when the police began to swarm the place so the group were able to protect their secrets. DHS kept the police from asking too much questions and so the only thing they had to worry about was getting Vincent to the hospital. Vincent had needed care and this time the doctor wasn’t going to let him leave on his own reconnaissance because he said that Vincent didn’t even know what bedrest meant.