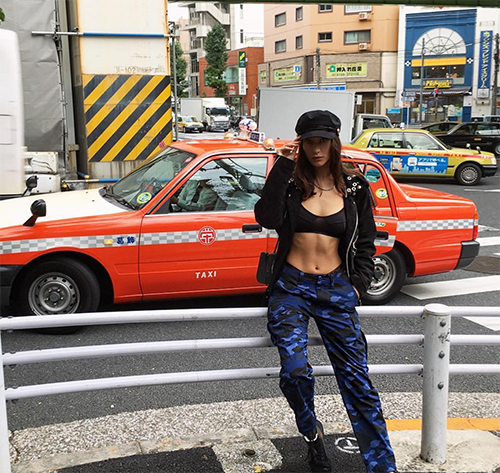 There’s a very good chance that Bella Hadid’s shocking and often see-through clothing and style might because she is sick of constantly being overshadowed by her big sister, Gigi Hadid. The young aspiring model was once again spotted giving the paparazzi a full show by wearing a slinky tank top and pasties that showed off her breasts while she was headed to dinner with her friends and family for her 20th birthday in New York City this past weekend.

Bella is not a reality television star, but many critics are pointing out that she is definitely acting like one, especially whenever the cameras are on her. If she’s not wearing a bra and tight workout leggings while having lunch with her father Mohamed Hadid, then she’s practically putting her breasts on display with her mother Yolanda Hadid only a few steps behind her.

Is Bella trying to make headlines simply because she’s not getting the same amount of attention that her sister Gigi is getting through her modeling contracts and runway successes? That might be the case as Bella is trying to garner media headlines one way or another, even if it makes her come off as trashy and desperate. Surprisingly, even her mother Yolanda Hadid must have thought the outfit she wore to her birthday dinner was appropriate, as she was nothing but smiles behind her daughter as Gigi was nowhere in sight. Are the Hadid sisters really feuding because of Bella’s jealousy?

Of course, it shouldn’t surprise anyone that Bella Hadid is jealous of her sister Gigi Hadid’s successful and high profile modeling career. While there’s plenty sibling rivalry in the entertainment industry, both Gigi and Bella got their start the same way: through their mother Yolanda Hadid’s ‘Real Housewives of Beverly Hills’ fame and most definitely their father Mohamed Hadid’s wealth and connections.

It’s no wonder that Bella is concerned that her modeling career hasn’t skyrocketed the same way her sister’s did, especially since they can both thank Hollywood nepotism and social media for getting them where they are today.

Tell us CDL readers, what do you think? Is Bella Hadid jealous of her sister Gigi Hadid’s modeling career? Is that why she’s taking desperate and even trashy measures to get noticed by the paparazzi? Let us know your thoughts by dropping us a line below and of course, don’t forget to check back with CDL for all the latest news and updates on all of your favorite celebrities right here.