Gigi Hadid Plastic Surgery: Model Worried Career Will End Because Of Lopsided Breasts, Goes Under Knife To Rescue Her Future? 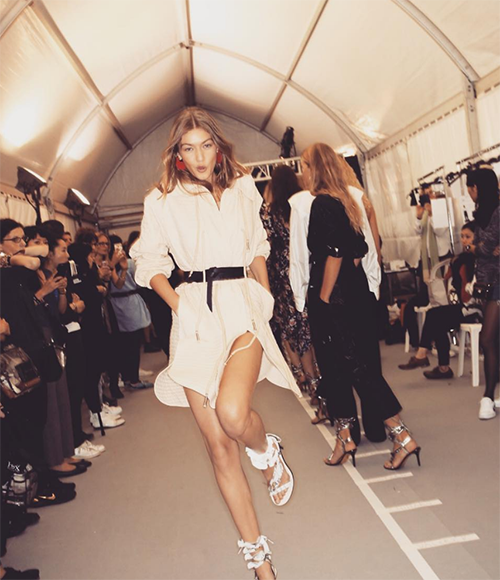 Gigi Hadid might be going under the knife to save her modeling career. There’s a new report that says the Instagram and runway model is apparently considering plastic surgery to correct her lopsided boobs, as she’s worried that it might ultimately ruin her career.

If Gigi Hadid retreats from the public eye in the next several weeks, both fans and critics will know why. The brunette beauty was apparently left embarrassed after photos of her during the Fendi show at Milan Fashion Week last week. She wore a see-through dress on the runway, in which everyone could see that one of her boobs hung much lower than the other, much to Gigi’s horror. And that’s why she’s supposedly looking for the best plastic surgeon in Beverly Hills to help not only fix her boobs, but make them look as natural as possible, too.

According to Now Magazine, one source close to the model dished, “She’s always been paranoid about her right breast hanging lower than the left, but having it exposed for the world to see has convinced her to do something about it.” What’s more, Gigi apparently wants to use the same surgeon that the Kardashian family often uses because she wants to fix her boob as fast as possible without anyone noticing.

Of course, Gigi Hadid can get all of the work done she wants, but that won’t change the fact that many people in the industry still don’t see her as supermodel who has earned her way to the top. If Gigi does indeed want to fix her breast, that will only further indicate that she’s obsessed with looking perfect in the same way that many so-called Instagram models look like on social media.

Plenty of big-name supermodels have stuck with their imperfections, like Cindy Crawford and her signature mole, Karolina Kurkova and her lack of a belly button, and Lara Stone and Lauren Hutton with their front gap teeth. Gigi Hadid might want to look perfect on the runway, but what she fails to realize is that it’s a model’s distinct differences and unique features that sets them apart – lopsided boobs included.

Tell us CDL readers, what do you think? Should Gigi Hadid fix her lopsided breast? Is Gigi too obsessed with looking like the perfect supermodel? Drop us a line with your thoughts in our comments section below!

Arrivederci Milano! 💥💥 So much to be grateful for. xx