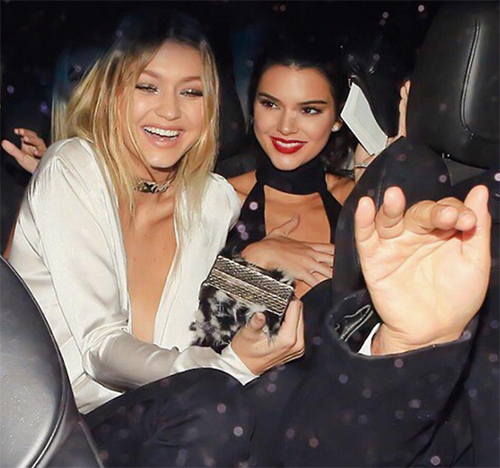 Gigi Hadid and Kendall Jenner have been besties for years – but when it comes to their careers, the two models are ruthless, and have no problem fighting dirty…even with each other. Gigi and Kendall have two completely different looks and styles – so they don’t wind up in competition over jobs too often. But according to insiders, Gigi and Kendall are in a full-blown feud over a HUGE upcoming gig…they both want to host “America’s Next Top Model.”

The CW finally cancelled “America’s Next Top Model,” and the show was picked up by VH1. Obviously, VH1 is geared to a younger crowd and they are searching high and low for the perfect host to take Tyra Banks’ place. Obviously, said host needs to be well-known in the fashion community, but also popular among their target audiences. Enter Gigi and Kendall. Either girl would be perfect for the job, and they both want it desperately!

According to our sources close to the models’ inner circle, Gigi and Kendall have been throwing shade at each other for almost a month now. And their friendship is definitely in trouble. One insider dished, “Kendall thinks that the job should automatically be hers because she has experience on television. But, Gigi thinks she should be the new host because Kendall could bring the Kardashian stigma on the show. The other night they were out with pals and wouldn’t even speak to each other. They are ruthless!”

There’s no question that Kendall Jenner and Gigi Hadid would both make perfect hosts on “America’s Next Top Model.” They should probably just bury the hatchet and co-host, how fun would that be? What do you guys think? Are you Team Kendall or Team Gigi? Who would you like to see on ANTM? Share your thoughts in the comments below!