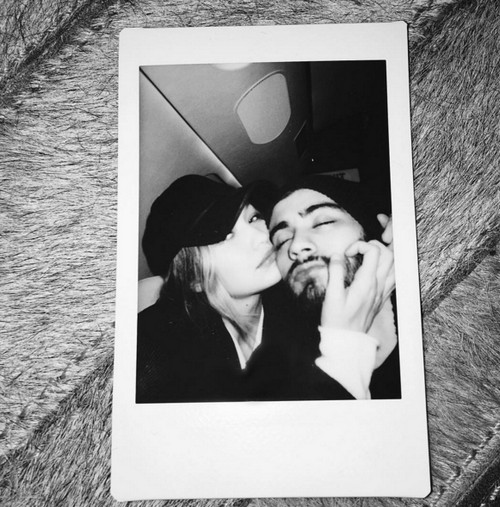 Zayn Malik took to Instagram, taunting Joe Jonas, and confirmed that he and Gigi Hadid are dating, a couple, and all the rest. The former One Direction singer has been dating his Victoria’s Secret model sweetheart for a few weeks now but finally made their romance official with a captionless Instagram selfie showing Gigi hugged up with Zayn.

That same picture was also a message to Gigi’s ex-boyfriend Joe Jonas, letting the romantic rival know there is no hope for a reunion with Hadid.

Gigi and Zayn have been surrounded by speculation about a possible budding relationship after a few sightings where the two celebs looked like they were out on a date. The first time Malik and Hadid were seen getting very friendly was at Justin Bieber’s American Music Awards after party right around Thanksgiving.

Gigi Hadid hooked up with Zayn Malik just a couple weeks post-split from Joe Jonas. When Joe realized that he and Gigi wouldn’t be getting back together, the bitter Jonas brother unfollowed Zayn on Instagram and Twitter.

To make sure the British crooner knew he wasn’t happy about Malik’s new hookup, Jonas also deleted a picture of the two singers together from Instagram.

So far Zayn Malik and Gigi Hadid have denied their romance but it’s pretty obvious there is something going on. Prior to Malik’s picture of the happy couple, they claimed to just be friends and be hanging out. Even Gigi’s mom Yolanda Foster refused to comment on the obvious couple, using the excuse that she hadn’t met Zayn yet.

Even though Zayn didn’t comment on the photo of himself and Gigi, it’s pretty obvious that the young stars are more than just friends. Gigi is seen leaning in with her face pressed against a closed-eyed Zayn while running her hand through his beard.

It’s a good thing Gigi and Zayn finally decided to make their romance public. It’s not like their pairing was a secret anyway, with multiple reports claiming that Malik and Hadid are often seen out partying at West Hollywood hotspot The Nice Guy and they can’t keep their hands off each other.