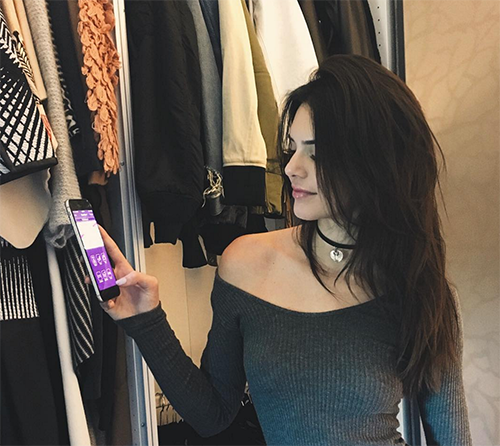 Kendall Jenner, Gigi Hadid, and Cara Delevingne are among some of the highest paid celebrities based on what they earn for social media posts. The new era of modeling is all about a model’s social media reach and the “It” girls Kendall, Gigi, and Cara are bringing in hundreds of thousands per post across their social media platform.

Modeling has evolved and now social media and especially Instagram has become a very profitable tool for models to attract sponsors. A recent report from CR Fashion Book talks about the new trend in modeling as stars like Kendall Jenner and her crew of model friends can make anywhere from $125k to $300k just for spreading one picture of themselves with the brand who is sponsoring the model splashed across their social media accounts.

Companies have figured out that having a model drop pictures wearing their gear or using their products helps boost sales more than any billboard ever will. That’s why agencies are starting to sign models based on how big their fan base is. The future of modeling is starting to decide a model’s worth based on their social media numbers and, right now, some of the top online earners are Kendall Jenner, Gigi Hadid, and Cara Delevingne who have learned how to turn themselves into online advertisements without making it obvious.

The practice of selling space in Instagram, Twitter, and Facebook pictures is kind of deceitful to fans of the celebrities who follow them online. Models and other famous celebrities have been making deals to post pictures wearing certain brands of clothing. Some stars have even been gifted expensive cars just so they can brag about their luxury items on social media.

When fans see their idols wearing certain brands or driving a specific car, it’s the perfect form of advertising and there are loopholes in social media advertising that both sides are taking advantage of in order to not tell fans that they were paid for their endorsement.

Kendall posed in her Calvin Klein underwear in a photo posted to Instagram and one has to wonder if she showed off that photo because the 20-year-old model wanted to or because she was paid to be seen in a certain brand. The same has happened for Jenner with the Balmain brand as well as the entire Kardashian-Jenner family with their supposed love of Adidas.

Even the lesser-ranked models are making banking from their social media accounts. The report claims that models like Karlie Kloss, Behati Prinsloo, and Miranda Kerr were racking up anywhere from $25k to $50k for posting a picture of themselves with specific products on the big three, Instagram, Facebook, and Twitter.

There’s a whole science to determining the value of a model’s social media post. It’s turning out that many are spending more time stealthily marketing products on their Instagram accounts because they make more money than most models make walking a runway. Kendall and her pals, Cara Delevingne and Gigi Hadid, seem to have hit the sweet spot for social media modeling. The top three internet earners could quit walking Victoria’s Secret catwalks right now and still be set for life.