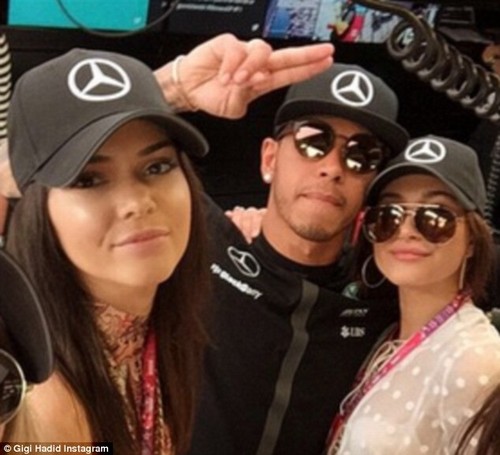 It looks like Kendall Jenner might finally have a boyfriend, Lewis Hamilton! The permanently single model and star of Keeping Up With The Kardashians has been single for over 3 years, but according to various reports she is now dating Lewis Hamilton. For those of you who aren’t familiar with Hamilton, the Formula One race car driver just got out of a lengthy relationship with Pussycat Dolls singer Nicole Scherzinger.

In May 2015 Kendall and Lewis were spotted hanging out, however neither would confirm nor deny that they were dating. After word hit the internet that Jenner and Hamilton were dating, they weren’t spotted together again until now. According to multiple sources, Kendall and Lewis were seen out and about in New York City various times this week and witnesses say that the couple were acting like a lot more than “just friends.”

The fact that Kendall and Lewis are remaining mum on their relationship, is almost a sure sign that they have a relationship. Both of them are usually quick to shoot down dating rumors if they are not true. Kendall Jenner has been single for years, and rumor has it that she was remaining available because she was in love with her bisexual best-friend Cara Delevingne.

Recently, Cara Delavigne professed her love for her new girlfriend St. Vincent, and it looks like Kendall has finally accepted the fact that there is no future for her and Cara – and has moved on and begun dating Lewis Hamilton. Although, we are all a little disappointed because this means that Kendall Jenner and Nick Jonas probably aren’t happening despite all of the rumors, and we were already brainstorming up cute couple names for them.

Do you think Lewis Hamilton and Kendall Jenner make a good couple? Are they in it for the long haul, or will they fizzle out again? Let us know what you think in the comment section below!