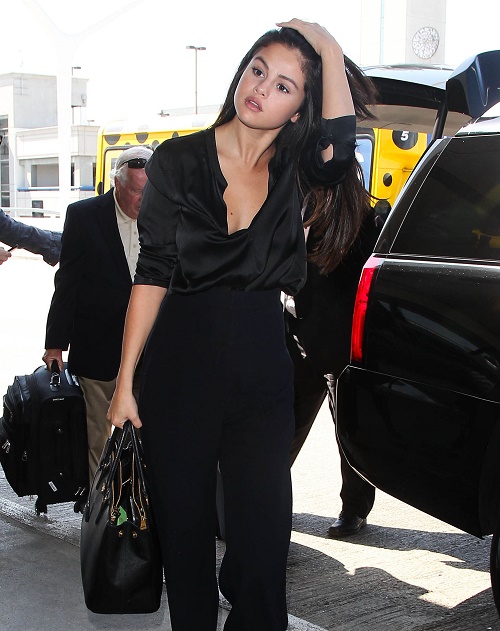 The feud between Kendall Jenner and Selena Gomez rages on. At one point, the two “it girls” were BFFs, but that all came crashing down when Selena allegedly caught Kendall hooking up with her then-boyfriend, Justin Bieber. There has been some bad blood between Selena and Kendall ever since. And now SelGo is furious that Kendall is going after another one of her exes – Nick Jonas.

Selena Gomez and Justin Bieber are over, and Selena is enjoying the single life. She recently began reconnecting with her ex-boyfriend, Nick Jonas, in July, and suddenly Kendall Jenner was interested in him as well and Nick’s brother Joe and his girlfriend Gigi Hadid have been trying to hook Kendall and Nick up. Apparently, this is not going over well with Kendall’s frienemy Selena Gomez.

An insider dished in this week’s edition of In Touch Magazine, “Selena feels like Kendall goes after all of her men! She wants Kendall to back off and stay away from her leftovers. Selena is genuinely hurt. She was trying to rebuild things with Kendall. And now, just as Kendall was finally finished with Justin, she moves on to Nick – who Selena just went out with!”

It doesn’t look like SelGo and Kendall will be patching up their friendship anytime soon. The snitch went on to explain that, “Selena feels like a fool. She’s upset and doesn’t have any interest in ever being friends with Kendall again.”

Kendall Jenner and Selena Gomez’s tight-knit circles of friends seem to continue clashing – and all over the same guys. There seriously are hardly any single guys left in Hollywood that haven’t been linked to either Selena, Kendall, or one of their friends. It’s nearly impossible for Kendall and Selena to stay away from each other’s sloppy seconds. Do you think Selena is being over-dramatic? Is it time for them to stop bickering over men? Or is Kendall violating “Girl Code?” Let us know what you think in the comments below!