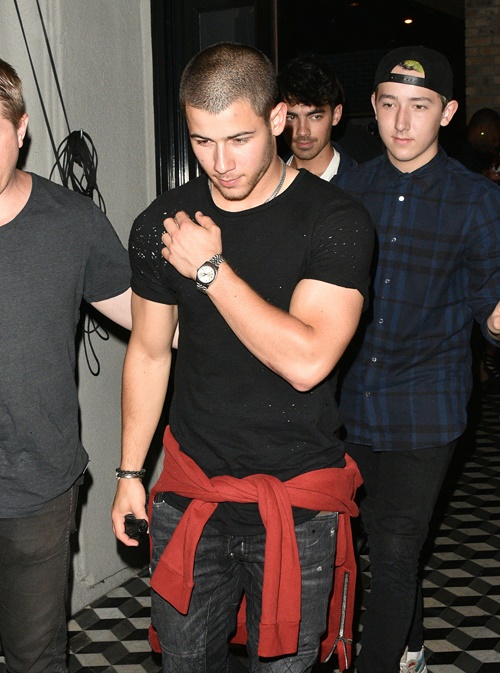 Kendall Jenner apparently isn’t gay after all. Sadly, it looks like she is done pining away over her BFF and bisexual pal Cara Delevingne. The Keeping Up With The Kardashians star finally has a man in her life (after a 3-year dry spell) and is reportedly dating pop star Nick Jonas. A few weeks ago, Nick confessed in an interview that his brother Joe Jonas and his girlfriend Gigi Hadid were trying to play matchmaker and hook him up with Kendall Jenner, and they totally hit it off!

According to a new report from US Weekly, Nick Jonas and Kendall Jenner have been secretly texting each other for a few weeks now, and they are definitely in to each other. Nick and Kendall are well aware of how complicated relationships get once they go public, so they are trying to lay low and keep their courtship out of the media.
An insider dished to US Weekly, “After being recently reintroduced, Jenner and Nick are getting to know each other better over text, but they had a flirty chemistry from the start. Nick was single and looking to date, and there was an obvious attraction. He absolutely thinks that Kendall is hot. When they are ready and it turns official, we will start seeing photos.”

As happy as we are for Kendall and Nick, we would be lying if we said we weren’t disappointed that she isn’t hooking up with Cara. Nick Jonas and Kendall Jenner definitely have potential to be the next “it couple,” with both of their careers currently booming. Nick Jonas’s latest solo album has been blowing up the Billboards, and Kendall Jenner has modeling contracts and campaigns being tossed at her left and right.

Do you think Kendall and Nick make a cute couple? Do you think that their relationship will actually last, or will it be over just as quickly as it started? Let us know what you think in the comments below!