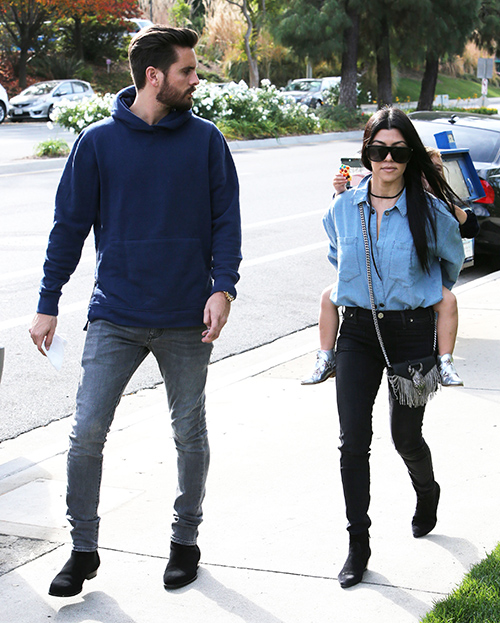 Scott Disick may have wormed his way back into the Keeping Up With The Kardashians family but Kendall Jenner clearly still hates her sister’s ex. Both Kendall and Scott attended a listening party for Chris Brown’s upcoming Royalty album. While there, the Victoria’s Secret model acted like she didn’t even know Kourtney Kardashian’s scandalous ex.

Kendall Jenner was seated with friends at Hyde in West Hollywood when Scott showed up with a group of friends on Tuesday, December 15. According to Us magazine, Disick strolled into the club with a new girl on his arm and Khloe Kardashian’s ex, French Montana, in tow.

When Disick and his pals made their way past Jenner, the model reportedly rolled her eyes at her almost brother-in-law. Scott and Kendall didn’t acknowledge each other at all the entire night and there is definitely tension between them.

It’s unclear exactly why Disick and Jenner are pretending the other doesn’t exist. Even after Kourtney Kardashian dumped Scott Disick, he still stayed in contact with Kendall. There have been suggestions that Disick blames Kendall for Kourtney Kardashian’s recent fling with 21-year-old Justin Bieber. We can’t imagine that is the case though because even Kendall is weirded out by Kourtney’s fling with Justin.

Even though Bieber dated Kendall’s best friend Hailey Baldwin, he was also reportedly messing around with Kendall too. That was the whole reason given for Selena Gomez dumping Kendall and Kylie Jenner as friends after Coachella last year. Selena was said to have walked in on Kendall and Justin fooling around. That’s why Gomez unfollowed the Jenner sisters on social media and is never seen spending time with the reality stars anymore.

Scott Disick knows Kendall Jenner’s history with Justin Bieber, so it’s doubtful that’s the issue between them. It was probably pretty uncomfortable for Disick to see Kendall while courting a woman who wasn’t her oldest sister. Kendall has been cheerleading for Scott and Kourtney to reunite and it’s looking more and more like that will never happen.

Jenner’s massive eyeroll at Scott had to do with the company he kept, which included his new arm candy as well as Khloe Kardashian’s ex, French Montana. For someone who wants to stay on KUWTK and in the Kardashian-Jenner family’s good graces, Scott Disick is going out of his way to make it hard to stay in everyone’s good graces.