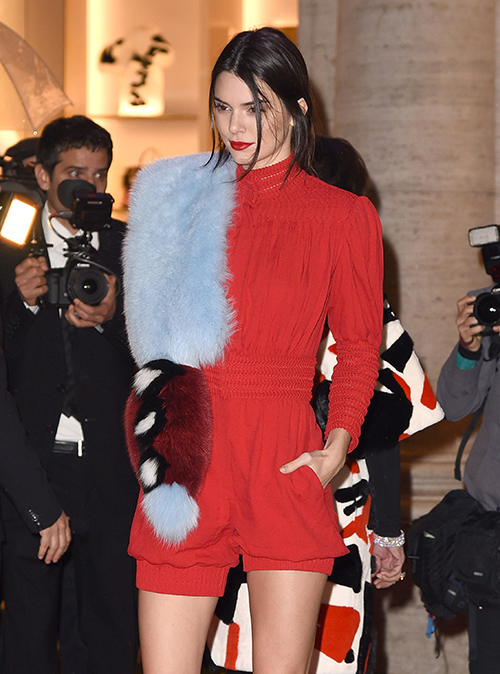 Are Kendall Jenner and Chris Brown dating? It’s no secret that Chris Brown and Kendall Jenner have been pals for quite awhile, but Kendall may have finally let Chris out of the friend-zone. Kendall’s BFF Gigi Hadid and her boyfriend Zayn Malik have been spending time with Chris, because Zayn and Chris are working on some music together. And Gigi and Zayn apparently have been trying to get Kendall and Chris to double date with them.

Here’s where it gets interesting, Chris Brown has had an on and off thing with Rita Ora for sometime now, and if you ask Rita – she is dating Chris Brown. Kendall and Rita have crossed paths in the past. Ora was actually dating Kendall’s brother, Rob Kardashian, and the exes had a major public break-up and Ora became a member of the Kardashian’s lengthy list of enemies. Even if Kendall isn’t serious about dating Chris Brown, she might play along just to get revenge on Rita for her brother Rob.

It’s no secret that Kendall and her famous Kardashian sisters have a fetish for bad-boy rappers and musicians. Kendall could definitely use a man or two in her life. Despite various reports, the Jenner sister has been without a boyfriend for years. At times, there were even questions that she may be into girls – because that’s how long her dry spell has really been.

Also, Chris Brown made some controversial statements about Kendall’s transgender parent, Caitlyn, when she first came out to the world. It’s no secret that Kendall hasn’t totally warmed up to Caitlyn – perhaps she and Chris have a lot more in common than we suspected. Maybe Chris slamming her dad was more than a turn-on than a turn-off.

What do you guys think? Could Kendall Jenner and Chris Brown be this summer’s hot new couple? How will Rita Ora react to her ex-boyfriend’s little sister stealing her man? Will Gigi Hadid and Zayn Malik be able to hook Chris and Kendall up? Share your thoughts in the comments below!