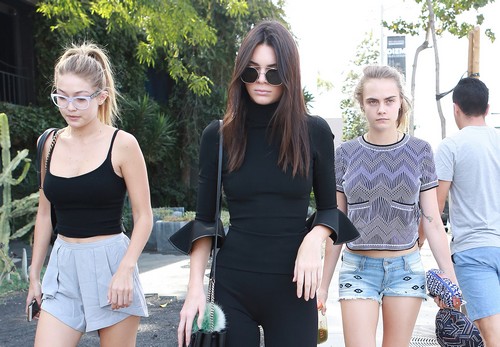 Sources for Life & Style claim that St. Vincent can’t stand the relationship between Kendall Jenner and her lover, Cara Delevingne. Kendall spends an awful lot of time with her “bestie” and tends to blast her social media accounts with the duos’ moments together.

There has been a lot of speculation in the air over the past year or so that perhaps Kendall Jenner is in fact a lesbian or at the least, bisexual. If that were true though, would she be dating One Direction hottie, Harry Styles? Or could that be a pseudo relationship that she’s using to hide behind so that St. Vincent can’t come down on her for being with Cara all the time?

From another point of view, we could be simply looking at best friends who love and adore each other just that much. These two are heading up a new clothing line that they are naming CaKe. This would be a combination of their names. Sweet as cake isn’t it?

This last “angle” is the most likely to be true from everything we have gathered so far. On the other hand, this wouldn’t be the first Jenner to be living a lie only to come to terms with true reality years down the road.

Whatever the case may be for Miss Kendall Jenner, let’s just hope that she is comfortable in her own skin and relationships and doesn’t feel any unneeded pressure to live a lie. Just be you. At the end of the day, that’s the most anyone should be asking of another human.

What is your take on the whole Kendall Jenner, Cara Delevingne, St. Vincent triangle? DO you think they can all just get along? Or is the drama only just beginning? Share your thought with us in the comments below! We love hearing from you!